You don’t have to be a baseball fan to have seen the success of a team coming from the most unlikely of places.

The baseball team has done something that some of the professional teams in the higher ranks of baseball have been challenged to do: They’ve made baseball fun again. In a time when some may think baseball is struggling with its popularity, the Bananas have found ways to draw crowds and keep them coming back for more.

How are they doing this? By shaking up the foundations of what it traditionally meant to be a baseball team.

Gone are the days of boring games and cheap hot dogs. In its place are flashy uniforms, creative promotions, and zany between-inning activities.

It’s like a circus mixed with sports, bringing excitement to the game of baseball.

How do you Innovate a Centuries-Old Sport?

Baseball has been around for a long time. Stretching back over 200 years, the sport remains a nostalgic part of American history. There’s something special about the comfort and familiarity of going to a ballpark, getting a hot dog, and basking in the sunshine while listening to the crack of the bat and the hopes of snagging a foul ball.

While American professional powerhouses like the NFL and NBA continue to grow in their popularity, Some have said that baseball has taken some heat for taking too long to throw it — the game moves too slowly, and there just isn’t enough pop in the on-field product to engage current fans and attract younger ones.

Peeling Back the Story from Savannah

The Bananas have been around for a split second in a game that spans more than a century of history. As a member of the Coastal Plain League, the team competes with 15 other teams that have rosters stacked with the top collegiate players in the nation. The Bananas came into existence when the city’s Sand Gnats minor league organization relocated to Columbia, South Carolina, in 2015.

Their origin story is something straight out of a movie script.

The team owner, Jesse Cole, was a former baseball player who dreamed of making it to the majors. As a pitcher for Wofford, he started to attract the attention of teams, but three complete tears in his shoulder ended his playing career. He segued into management and worked as a GM at 23 years old for what he called “the worst team in the entire country” that averaged 200 fans a game.

He saw an opportunity and purchased the Savannah Bananas with his wife. In doing so, they maxed out credit cards, sold their house, and emptied their savings account with the dream of turning a dreadful, moribund team that never had a sellout into a powerhouse baseball organization that attracted fans, engaged them, and helped propel the forward trajectory of the sport.

The team operates in a unique fashion, eschewing some of the more traditional rules that are adhered to by the majors. Players announce themselves when they go up to bat and hang out in the stands with fans. One player acquired a 24-piece band to assist their walk-up with a John Cena song, leading Cena himself to Retweet a video of the moment the next day.

Recently, a pitcher and his fellow Banana players broke out in a TikTok dance — in the middle of a game — only to still toss a strike to an opposing batter. On Facebook, the video has already tallied almost 400,000 views. Now, they’re considered TikTok’s “favorite team,” and with 2.5 million fans, they have more followers than many MLB teams. 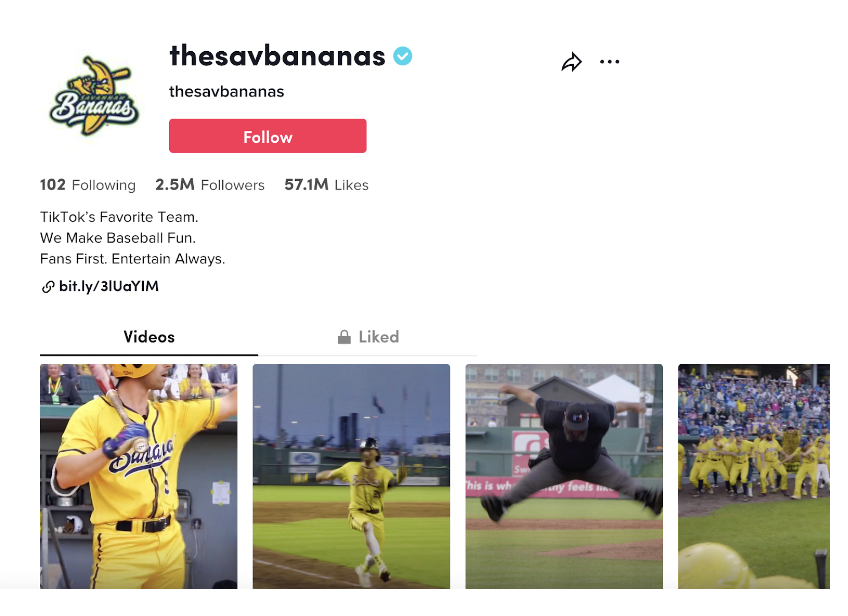 The team approaches announcing in a unique way. Players are mic’d up on the field, and their unique play-calling is broadcast on social media platforms, leading many of these moments to go viral. Their first base coach dances, and so do a squad of cheerleaders known as the Dancing Grannies. At times, the team plays baseball in kilts.

Here, the MLB has taken a cue — for every Sunday Night Baseball game, a player will be mic’d up during the broadcast on ESPN that has already featured stars like Francisco Lindor and Bryce Haper.

Cole also implemented something called Banana Ball which is a set of rules designed to make the gameplay go faster. In summary, no batter can step outside the batter box during an at-bat, no mound visits, no walks, and fans catching foul balls turn into outs for the team.

The success has been undeniable. Since Cole arrived and implemented these changes, the team has smashed league attendance records, and the season ticket waiting list is well over 10,000 people strong. The team’s social media rise has been fast: They’re TikTok’s “Favorite Team” and have more followers on that platform than any MLB club, with over 14 million views.

There are some fascinating lessons that can be applied to the world of sports marketing from Cole’s success:

The Bananas are just coming off their inaugural “World Tour” where they played exhibition games at historic stadiums across the country, often to more than 8,000 fans.

Do you know who has taken notice? Many MLB clubs are calling Cole, and the former baseball player who dreamed of playing in the Big Leagues now has a new dream — to have his Bananas sell out Fenway Park. That one may come a lot quicker than he realizes.

Do you have a dream of building a successful sports tech startup? Do you have an idea that can change the game? Join our elite class of startups for our 2023 program. Learn more here.