Now that the Tokyo Olympics are in the record books, athletes and fans turn their focus to the next Olympic games.

Due to the pandemic pushing back Tokyo’s games until this year, the next Olympics will be here before we know it—in just about six months. When the cauldron in Tokyo was extinguished, signifying the end of the summer games, the torch officially passed north where the winter games will be hosted in China.

Some of you might recall venues like the National Stadium, also known as the bird’s nest for the 2008 summer games. Now, these same venues will welcome winter sport athletes from around the globe from February 4 – 20, 2022.

As one chapter in Tokyo has come to a close, we wanted to look back at the technology that we here at SportsTech thought moved the needle.

One of the biggest themes at the Tokyo games was stadiums devoid of fans.

Professional sports have been operating in empty arenas for much of the last year, but this was the first globally recognized sporting event with empty seats. For fans who had planned to attend the initial instance of the event in 2020, it was disappointing to cancel global travel to such a prominent event.

But, for athletes, having family not be there was one of the toughest adjustments to make. A number of American Olympians had to calibrate their expectations based on the pin-drop quiet of empty stadiums, and adjust to how they were able to keep in touch with family and friends back home.

According to U.S. soccer star Megan Rapinoe, the look and feel and sound was way different. “There’s quite literally no fanfare. There’s signage, you got the lanyard and you have the things that make it feel like an Olympics, but it’s definitely a little bit different.

At times, the Olympic Village that housed athletes was its own separate world, devoid of the busy traffic you’d expect to see at previous Olympics. Because of the strict pandemic protocols in place in and around Tokyo, athletes were restricted to their venues and the village. When they weren’t competing, they were in the highly protected in a cordoned-off compound with a regular cadence of testing and monitoring. 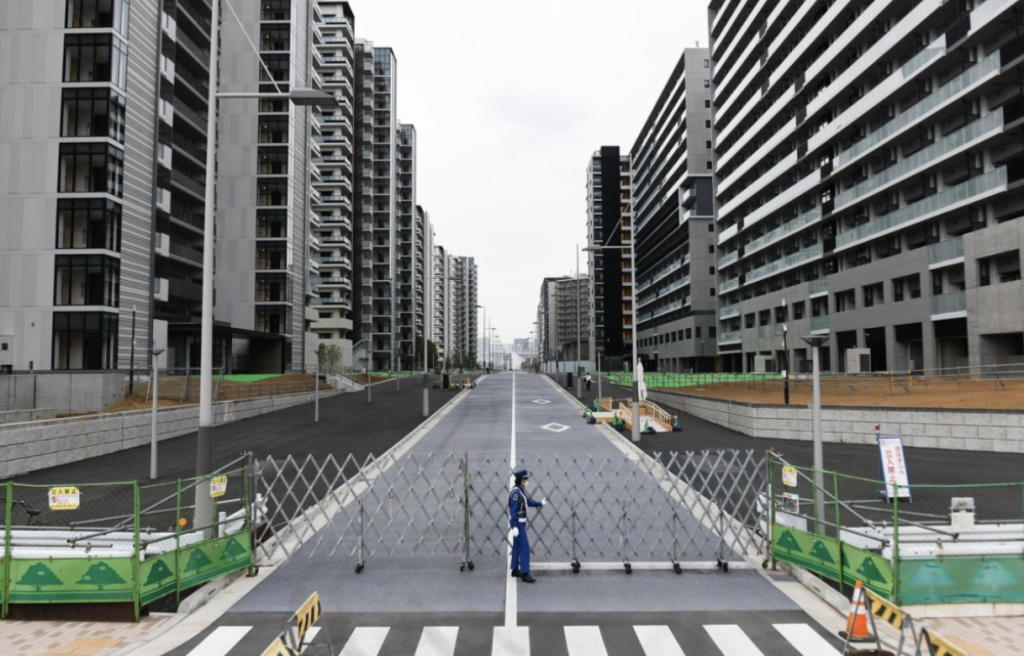 For swimming and diving, the athletes typically gauge their performance on the fans and the noise they generate. Without them, it was different. “When you come up you hear them, ” noted Delaney Schnell, who won America’s first-ever medal in the 10-meter synchronized diving. “That’s where it is tough not having spectators because it does give you that adrenaline kick.”

There were a few instances when some athletes did have the fortune of having fans attend their events, including the marathon and road cycling events that were held exclusively outdoors.

Broadcasters worked for months during the pandemic to perfect the at-home fan engagement experience. Nobody could have predicted they would do the same during the Olympics, even as professional sports and fans were returning to stadiums all around the globe.

During the Olympics, you probably noticed many athlete’s families and friends were filmed at viewing locations hosting watch parties. And in many cases, NBC deployed camera and production crews to film profiles that were stitched together to be broadcast before or after athlete performances.

One profile showed the family of Olympic diver Krysta Palmer. Her parents are both long-haul truck drivers for Schneider, and the profile showed how they travel, live, and work out of a big rig. The Palmer family story was also captured in a Team USA profile as Krysta was headed to the qualifications for the USA Swimming Team.

NBC teamed up to help showcase family watch parties spread all over the country to help fill the void of empty stadiums.

Not only could fans at home see the reactions of athlete’s families back home, they could also see connectivity with athletes after their performances via video conferencing in real-time (as they happened in Tokyo).

The idea was to replace the live interactions with those happening at home to create energetic and engaging watch parties.

“We’re treating friends and family, as we call it, like a sports venue in our strategic planning. The coordination of cameras each evening in primetime is rolling out with a team of athletes, bookers and technical support in Tokyo and stateside.”

One of the largest production challenges was to create a giant watch party at Universal Resorts in Orlando where many families came together to watch many of the events. That party was a constant focus of broadcasts and fans at home could see many different family members cheering on, sometimes late into the evening U.S. time.

Reporters were also on-staff to capture some of these moments as they happened live and those were used to help fans at home invest in the storylines and unique scenes.

These are three of the at-home / athlete moments that had us cheering/rooting/crying the most:

When Caleb Dressel won gold in the men’s 100-meter, he was able to connect with his family on a video call, and the ensuing image was impossible not to cheer for. 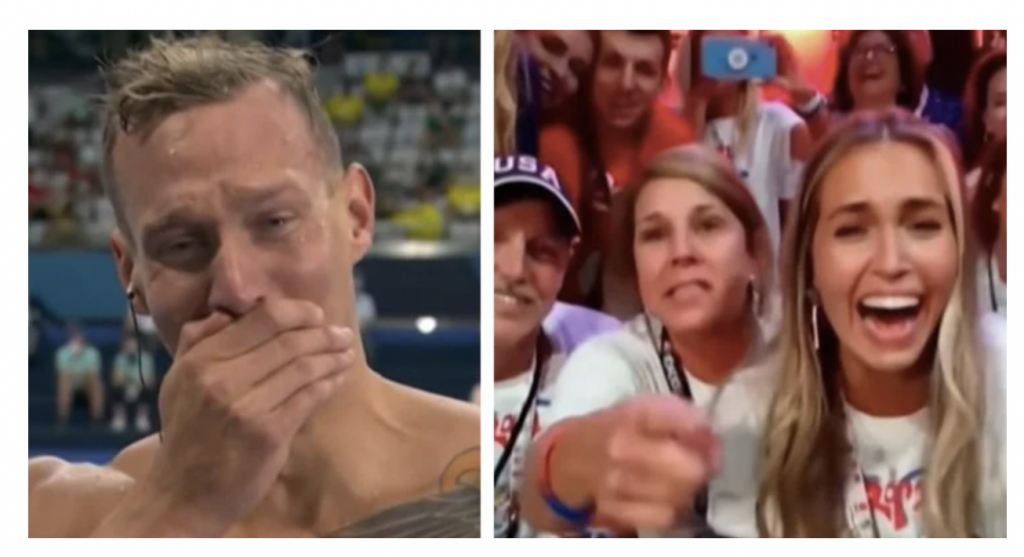 Suni Lee’s rise to Olympic gold was one of the more exciting storylines we followed during the Tokyo games. As she captured the All Around gold, the video celebrations broadcast on NBC after her win brought the world to her celebrating family in Minnesota.

Suni Lee’s family is BUZZING!!!! All around gold for the American gymnast.

When Lydia Jacoby stunned the planet with her 100-meter breaststroke gold, we literally jumped out of our chairs, too. Just like what happened with her hometown watch party from Seward, Alaska—a state that has just one 50-meter pool!

They were going wild in Lydia Jacoby's hometown of Seward, Alaska after she won gold.

In the future, documentary films will evaluate the events of July 30, 2021 when superstar gymnast Simone Biles withdrew from the uneven bars and vault finals.

The way the news broke, it made it seem like there could be a medical issue and subsequent statements issued from the team indicated she would be “evaluated daily.”

Eventually the world learned that Biles, who entered into the games as a heavy favorite, withdrew to focus on herself—and her mental health.

“For anyone saying I quit, I didn’t quit, my mind and body are simply not in sync as you can see here,” Biles wrote in an Instagram post. “I don’t think you realize how dangerous this is on a hard competition surface. Nor do I have to explain why I put health first. Physical health is mental health.”

As armchair sports fans watching gymnastics from home, it’s possible to forget how incredibly dangerous this sport is. One incorrect calculation could be the difference between landing correctly or suffering a serious injury.

What made this story even more unique was that it seemed like the first time a global sporting event had the spotlight shined on the fact that our mental health is equivalent to our physical health.

Aaron Rodgers, quarterback of the Packers in the NFL, mentioned her story in a press conference thousands of miles away in Green Bay bringing the topic of athlete mental health into the national dialogue.

He further expanded on this in a conversation with The Ringer.

“I give Simone so much credit for her ability to speak the truth, her truth, and to answer tough questions, and to have the courage to say, ‘I’m scared’ and ‘I don’t feel like I should be out there,’” Rodgers said. “She’s the greatest gymnast of all time. And mental health [awareness] is an issue that is continuing to break down the stigmas that don’t allow us to talk about it or only allow us to talk about it in a super negative, depressive, suicidal way. People of all ages and all professions are dealing with mental issues, especially during COVID.”

In 2020, 42% of Americans reported experiencing symptoms of anxiety or depression, up from 11% the year before. The pandemic has accelerated many of these cases in ways that we are just now beginning to understand. Now, the investment deluge is on. By the end of last year, venture investors spent $1.5 billion in mental health-related startups to the tune of more than 120 deals.

In the sports realm, Olympic swimmer Michael Phelps has been a celebrity endorser of Talkspace. Mindfulness apps that allow you to meditate, focus, and relax are big in the sports landscape where many pro athletes are not only endorsing the products but throwing in their own cash as well. While these products are seeing entry into the professional work world, they are also supplementing training and mindfulness for sports stars, too.

In April, Megan Rapinoe and Vikings linebacker Eric Hendricks were part of a $10 million series A round for Real, a mental health startup that provides therapy and mental health tracking.

It’s about time that the stigma of mental health has been eroded, but we have a long way to go.

As athletes start to embrace and champion these mindfulness apps and the important discussions around mental health, we believe that there will be lots more opportunities for startups and founders to create and launch new products that will continue to help athletes focus on their mental health in ways we never imagined.