Olympians Are Preparing For Tokyo

After facing a year-long delay due to the pandemic, the games have now taken on profound meaning for Japan and the world.

On April 14In Mid-April, Japan celebrated 100 days left until competition for the XXII Olympiad begins. It was a poignant moment as officials stood atop Mount Takao with sweeping views of the city that will soon welcome thousands of athletes from all over the world. The Olympic rings were unveiled accompanied by the sounds of a conch shell played by monks from a local temple.

Several prominent officials were in attendance and voiced their support for the games and reflected on the meaning of the Tokyo games.

“The Games will be a celebration of resilience, of solidarity, and of our shared humanity. Together, the world has faced an unprecedented crisis, and Tokyo 2020 is committed to offering a light of hope and solace this summer,” said Tokyo 2020 President Hashimoto Seiko.

“We hope this Tokyo 2020 Games will be a symbol of sustainable recovery. We need to be meticulous and bold at the same time [and] prepare ourselves for the Games,” Governor Koike reflected in her opening remarks.

The games will be from July 23 to August 8, followed by the Paralympics (which were also delayed a year) on August 24 to September 5.

As of now, global sports fans will be able to view via broadcast only. The games have restricted foreign fans from attending, although Japanese fans will be allowed to attend some events. There are also a number of intriguing innovations that will shape not only the Tokyo games but how future games are planned and played out.

Here are a number of other angles we’re following in the lead-up to the 2021 Tokyo Olympics. But, first, let’s give you a recap of our recent webinar on how athletes are preparing for the games.

In 2020, athletes had to adapt to the new world and change their schedules. No longer able to train in gyms or Olympic facilities, they got creative. Just as you worked from home, they worked out from home—training in garages, backyards, ponds, and fireplace mantles.

Our recent webinar took an inside look at how athlete’s strategy for continuing athletic excellence and tradition straddled the line of keeping them both mentally and physically healthy.

Here are a few highlights:

You can tune into the webinar right now by watching below. We hope you enjoy it!

Five-time Olympic gold medalist Katie Ledecky just swam her fastest 400-meter freestyle a few weeks ago. Now, she’s training and preparing to add to her medals in Tokyo, but with some reservations.

“I think everyone has some level of concern in trying to keep each other safe, we’re all taking precautions very seriously,” she said in an interview with NBC News.

“At the end of the day, it’s a competition. When you get up on the blocks next to the seven best swimmers in the world, you want to be your very best,” she said.

Ledecky has been training with Amanda Fleece, a senior coach for the U.S. Olympic and Paralympic Committee who trains swimmers to use the best and right muscles to help them win. She explained the techniques of training the dominant muscles required of a whole-body workout like swimming, in addition to customizing workouts based on athlete strengths and weaknesses, as well as helping swimmers work small intricate muscles surrounding joints.

“Every athlete is their own person, what strengths do they need. Where do they need to be more powerful and we write a strength program around that,” Fleece said in an NBC interview focused on how female STEM professionals are changing sports. 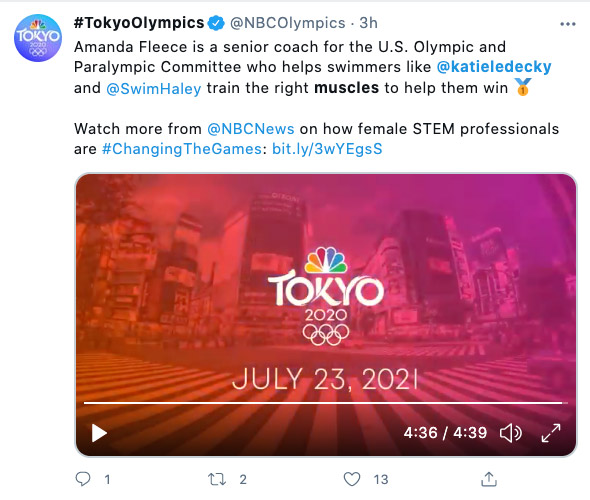 Why Retire? Keep On Competing

There are a number of Olympians who were contemplating retiring from their respective sports immediately following competition in Tokyo. Now, they’re wondering if there is an open window to continue training and preparing for one final time at the games in Paris in 2024.

With a relatively compressed window going between Tokyo into the next Olympics in Paris, some athletes have realized that it may be possible to reach another Olympics as they’re three years closer. The pandemic forced many athletes to pause from training, recalibrate their schedules, contemplate the future, and inevitably return to training. They made do anywhere they could—with official facilities and gyms closed, they got creative and used what they had at their disposal and in their homes.

Gymnast Simone Biles has been undefeated in the all-around competition since 2013. She owns more World Championship and Olympic gold medals combined than any other gymnast—in history.

The pandemic forced the closure of her workout facility and made her reflect on the future. More than anything, it took a mental toll.

“I don’t know how I’m going to do this. Another year out? I don’t know if it’s possible for me mentally when I had three months and I’m done,” she told Sixty Minutes in a February interview.

Biles ended up taking seven weeks off before getting back to the grind and adding to her legacy as the greatest gymnast in history.

After Tokyo, there’s a good shot she’ll continue to tour and then evaluate what happens for Paris.

What Are You Excited For?

What are you most looking forward to watching at the Tokyo Olympics? Are you going to keep an eye on the athletes and how their training has paid off? Or, are you going to watch how the networks are using innovative techniques to keep fans across the world entertained and excited? Share your thoughts and ideas with us on our social media channels including Facebook, Twitter, Instagram, and LinkedIn.