Baseball records are cherished and celebrated by players, teams, and fans—data points etched into record books and in our collective memories.

Tonight, New York Yankee Aaron Judge has the chance to tie one of baseball’s most celebrated records, and the bets are pouring in from sports fans. nVenue, a member of Comcast NBCUniversal SportsTech’s company portfolio, will play a big role in calculating the odds Judge will hit a homer with its live, in-game predictive analytics and micro-betting platform.

“Powering the first-ever predictions live on screen for these baseball broadcasts has been a dream come true,” said Kelly Pracht, nVenue’s co-founder and CEO. “Our numbers have updated flawlessly in real-time for every at bat, generating tons of conversation, increasing fan engagement, and showcasing the power of data.”

Judge is looking to surpass Roger Maris’ single-season home run record of 61, set in 1961. The record stood untouched for 37 years until Mark McGwire broke it in 1998. Maris’ benchmark has been surpassed six additional times since then – but only in the National League.

That could change tonight during a matchup between the New York Yankees and their divisional rival Boston Red Sox. Yankee right fielder Aaron Judge sits on 60 home runs for the year. Should he hit his 61st during the game, he’ll tie Maris’ AL record, and in the event he hits two homers in tonight’s divisional bout, the record will fall – a historic moment indeed. Throughout last night’s game, the broadcast showed live shots of both the Judge and Maris family, awaiting history that culminated in an anxious ninth inning, 404-foot blast that nearly cleared the warning track. It would have been true in 13 other MLB ballparks.

nVenue’s machine learning algorithms consider 120 inputs from the field of play, including not only batter and pitcher historical data but temperature and wind, which will add compelling layers to modeling that seek to pinpoint Judge’s history-making homer. 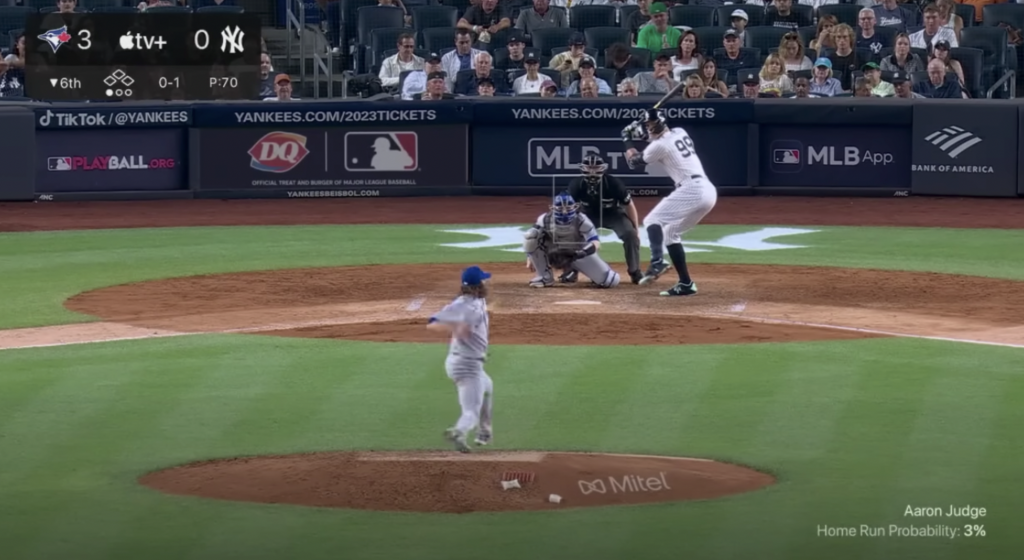 A few other interesting nuggets to ponder during the game:

“Home runs are incredibly unlikely in any major league game, but that’s why we watch live sports,” Kelly said. “Moments like tonight are why fans have and always will micro-bet! Whether that’s on their couch with friends or on an app, fans love to engage in big moments where players might beat all the odds. We are reading that more bettors are betting on whether Judge will hit a home run in a game more than they are on who wins or loses!”

This is an exciting moment for fans to engage, no matter what unfolds, and to see what creative partnerships and opportunities emerge.