NASCAR On Track To Major Change

Is it possible to win at a sport before the season even begins?

If you were to ask NASCAR President Steve Phelps that right now, the answer is a resounding yes.

It’s difficult to emerge from a global pandemic and have positive expectations as the American professional racing sport drops the green flag, but there is a lot to be excited about when the drivers emerge behind the pace car at Daytona.

NASCAR was a major bellwether in sports last year. When races couldn’t proceed, they turned to esports racing to rave reviews and huge viewership. And, when social justice became a global headline, NASCAR confronted heady issues with their roots by banning the Confederate flag from all races and events. Another test came when a noose was found in the race garage for Bubba Wallace. It created conversations, both internally and externally, that outwardly shows how the sport is diversifying and creating a space for all.

“When you think about what happened in the social justice space at a time when we were the first major sport really participating, the voice that we had – that started with the driver video to address our audience about doing better, to do better in education about social justice – around what was going within the country at that moment. We had the unfortunate situation with Bubba…. That was a very, very important moment that happened in the span of about two-and-a-half weeks for our sport,” Phelps said. “What happened out of all of that was opening up to an entirely new fanbase.” Not only that, Phelps noted that it opened up to entirely new employees, sponsors, and maybe most importantly, new owners.

Here are a number of other stories that are taking shape as the sport looks to take off in 2021.

In a way, NASCAR has been thinking about how to develop its talent pool in creative ways for almost a decade. The sport recently announced the incoming class of the 2021 NASCAR Drive for Diversity program. Chosen by a combination of merit, on-track performance, historical race records, and references, the program launched in 2004 has previously selected top drivers you’ve heard of including Bubba Wallace, Daniel Suarez, and Kyle Larson. New this year will be

Perhaps, there was no bigger ownership splash ahead of this year’s racing than that of Jordan becoming a NASCAR owner.

Jordan purchased the charter for Germain Racing and became the first Black majority owner of a racing team. He partnered with Denny Hamlin as minority-owner and Bubba Wallace joined as the Cup Series driver.

The move couldn’t have come at a more important time. According to Dr. Brett Boyle, a marketing professor at Saint Louis University could mirror Tiger Woods’ impact on the game of golf — driving interest in the game for new audiences.

That much-sought after demographic saw a big leap for the PGA last year. When play resumed on the course, the first dozen tournaments saw a 50 percent leap over comparable events back to 2010. The coveted 25-54 demo saw a 96 percent increase in viewership.

“Golf became very meaningful for viewers who were starved for live sports,” said Tom Knapp, executive vice-president of programming for the NBC Sports Group. “Golf and NASCAR were the first sports back and I think we took for granted how much sports meant to viewers and our lifestyle. When golf came back, folks turned it on.” 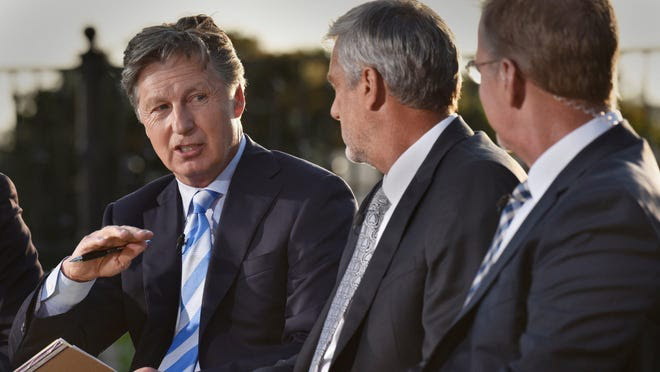 “Younger folks seeking competition on TV watched golf in bigger numbers when it came back,” he said. “Then they saw the young, dynamic, athletic players on the leaderboard each week and identified with them. We’re building a future fan base that thinks golf is cool, just as a generation thought

You may not know the name Armando Chrisitan Perez, but you sure have seen him. That’s Pitbull, an international music sensation who sees a huge opportunity to tie culture together through his efforts of owning a NASCAR race team. Pitbull also sees NASCAR as a useful tool in the promotion of the Sports Leadership and Management (SLAM!) Academy, for which he serves as brand ambassador. SLAM, which opened in 2013, primarily serves low-income students of color.

It aims to take advantage of kids’ interest in athletics to show them there are other sports industry careers besides playing on a team. “If you’ve seen what I put in the last eight years in education, I never put my face next to anything for propaganda. There has to be the grassroots of it, something that’s real,” he said. “Because if it’s not real, clearly we’re going to see that in the near future, which is not going to be the case.

In addition to building new audiences, this move by Jordan and Pitbull also brings the possibility of new partnerships for the sport of NASCAR.

Jordan brings relationships to companies that haven’t been part of racing before including Nike, Pepsi (owner of Gatorade), and as we mentioned earlier — DraftKings. Wallace himself has relationships already with DoorDash, Root Insurance, Columbia Sportswear, and Square’s Cash App.

Far more than just partnering because of Jordan, it seems that companies who sign on this year will be ones looking to support positive social change. And, who doesn’t want that?

All the change is paying off. According to Morning Consult’s annual report for “Fastest Growing Brands”, NASCAR is rising in the rankings.

Of the more than 2,500 brands they track and survey American consumers, NASCAR ranked 9th amongst Gen Zers. That’s a huge shift for a sport that recently was wondering about how to make in-roads with younger fans. This is the demographic of Zoomers, Twitchers, and Tik Tokkers.

And, just like that, Tik Tok has entered the racing fray. JD Motorsports signed Tik Tok as a sponsor with their No. 6 car driven by Ryan Vargas — an alum of the Driver for Diversity class.

Vargas is a perfect fit. The 20-year-old driver has built a huge audience through his social media skills and showed skills on the business side of NASCAR like relationship-building and partner acquisition.

“TikTok has provided me with an incredible outlet to reach new fans and demographics through fun and creative content, and I’ve seen the highest growth in followers on TikTok over my other social channels,” Vargas said in an article published on NASCAR. “The opportunity to run the No. 6 TikTok Chevrolet Camaro in the NASCAR Xfinity Series for the rest of the season is an absolute dream come true. Johnny Davis Motorsports took a chance on me last year and I’m excited to bring this amazing TikTok partnership their way. I wouldn’t want to make this partnership a reality anywhere else.”

While some leagues and sports are wondering how to keep their advertisers, NASCAR is adding to their lot. This year, they hope to see 36 *new* advertisers join the sport in new and emerging categories including packaged goods, financial services, insurance, and Quick Service Restaurants.

Streamers want a piece of the racing action, too.

This year, Netflix is debuting a racing-themed series called “The Crew” which will star Kevin James which will be heavily promoted during the Daytona racing weekend. This showcases new arenas of content exploration that will work to grow and nurture their younger fanbase, while courting new sponsors and advertisers.

2021 will be an exciting year for racing. With so many developments across the business, advertising, and racing side of the sport, we’ll be sure to track how these updates impact the sport and the industry as a whole.