Why Pros Are Embracing Esports

It’s truly hard to believe, but we’re coming up on a month since many of the world’s amateur, collegiate, and professional sports started canceling in the wake of COVID-19.

At first, before the world truly understood this disease, there were glimmers of hope that this would be a temporary pause. Now, it looks like many athletes and professional sporting leagues are preparing for worst-case scenarios such as canceling entire seasons.

In a few instances, creativity in collaboration with technology is helping to fill a much-needed hole in the sports universe. Earlier this week, the NBA announced they were looking into ways for the game’s best sharpshooters to compete, virtually and from quarantine, in a game of ‘Horse.’

Now, a handful of leagues including La Liga, Major League Soccer, MotoGP, NBA, and NASCAR are going virtual in unprecedented ways much to the delight of their fans clamoring for something—anything to cheer for.

With no other sports to consume, esports is capturing new audiences anchored by the actual play and participation of established professional athletes.

Here are some of the ways leagues are creating virtual contests for fans during a time when the world needs it more than ever:

At a time when many of us were dreaming of watching the NCAA Final Four in Atlanta, we got another tournament broadcast on television and hosted by Ronnie “2K” Singh, the marketing director for 2K Sports. Players are seeded by their actual player ratings and the matches, some of which have been lopsided upsets. Video feeds capture real conversations (and, in the case of Patrick Beverley, (trash-talking) from their homes—our first looks at NBA stars since the season halted. The winner of the tournament gets a $100,000 donation to help pandemic relief efforts.

Thanks to advances in computing technology and at-home racing setups, racing has been a prominent player on the esports stage. It was a natural fit when eNASCAR had its first race March 22 with a roster of their real drivers virtually competing in front of a staggering 900,000 viewers. The next race at Texas Motor Speedway drew more than 1.3 million viewers and became the top-trending topic on Twitter. Due to this success, iRacing is beginning similar virtual circuits for both Indycar and its truck racing series.

As more people are taking to social media channels, Facebook has realized their platform is one way people can stay connected and safely participate in gaming during the pandemic. This week, they announced opening early access to Tournaments, a feature that will seek to help upstart Facebook Gaming stand out. Last year, they saw more than a 200 percent increase in monthly viewership and carved out an 8.5 percent market share in a vertical dominated by Twitch. What makes Tournament unique is they seek to be a one-stop-shop for tournament organizers providing tools for registration, seeding, bracket management, and scoring.

As Vegas casinos and sportsbooks began shuttering in order to help flatten the curve, one of the biggest challenges was in how they would handle this stoppage.

What once was on the sidelines of most bettors betting purview is now taking center stage. 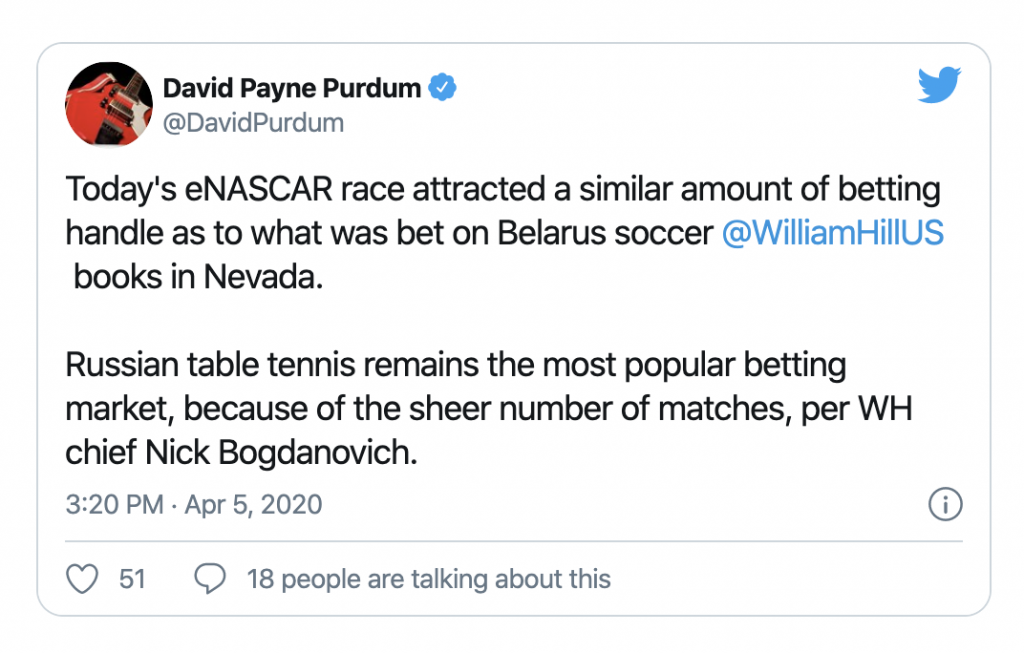 In the last few years, betting was making headway across the United States on computers and mobile devices. Now, bettors are making their way to digital gaming platforms where they can place bets on eNascar races, iRacing, the NBA 2K tournament, and even simulated games.

While esports live tournaments are subjected to the same perils as professional sports, a handful like League of Legends Championship Series (LCS), ESL Pro League, and the ESL One Los Angeles all were able to segue to pure digital formats with ease.

Unlike the pro sports calendar, many of these esports events are set to continue and it will open up new opportunities for viewers and bettors alike.

“Opening up the immense potential of esports to a whole new market, who is almost forced to pay attention with no traditional sports going on, is certainly a bit of a catalyst for the entire industry,” explains Kevin Wimer, Chief Marketing Officer for Rivalry.

So how is this impacting traditional sporting formats? Rocket League, FIFA, and F1 are typically considered second-tier esports titles, but they’ve experienced skyrocketing traffic of more than 200 percent in the wake of the pandemic. According to Malte Hegeler, head of product development at OddsMatrix, “In the past weeks, we’ve witnessed incredible growth of these titles making up 80% of all bets we’ve seen in esports.”

Some of these games are truncated, FIFA matches take about 15 minutes, but the cross-over to fans is easy because the market is the same as the real-life sports they bet on.

While sports are stalled as the world comes together to help bring an end to the COVID-19 pandemic, emerging startups and entrepreneurs can help solve challenges to bridge into new markets and help capture new audiences.

If you’re at the ideation stage or product stage of a company that is working on solving some of the most challenging and unique aspects of sports, we’re interested in learning more.