The Rise of the Athlete Tech Investor

When many of us were growing up, the athletes we idolized and imitated on playgrounds made significant amounts of cash doing what they were best at… their sport.

But, it wasn’t always that way.

It’s hard to imagine in the age of the mega-contract and multi-million dollar endorsements, but there was a time when pro athletes had to have a side job or offseason work to supplement the money they made on the field.

The first million-dollar contract wasn’t even a thing until the early 1970s. The Winnipeg Jets made Bobby Hull a millionaire when he signed a 10-year-deal worth $1 million. People thought that was nuts at the time. On deck, Dace Parker signed a 5-year-deal in 1978 that paid $5 million, the first pro-ball player to earn the accolade.

Arnold Palmer grossed $3.6 million during a 52-year professional golfing career. Off the greens, Palmer has built an empire of real estate holdings, golf courses, and an eponymous lemonade and iced tea brand worth more than $875 million dollars.

The same is true for an NBA veteran you may not be familiar with. Junior Bridgeman was a first-round pick who was a sharp-shooting sixth-man for the Milwaukee Bucks in the 1970s. He was sent to the Bucks from Los Angeles in a package deal that brought Hall-of-Famer Kareem Abdul-Jabar to a team that was a force throughout the late 1970s and early 1980s. 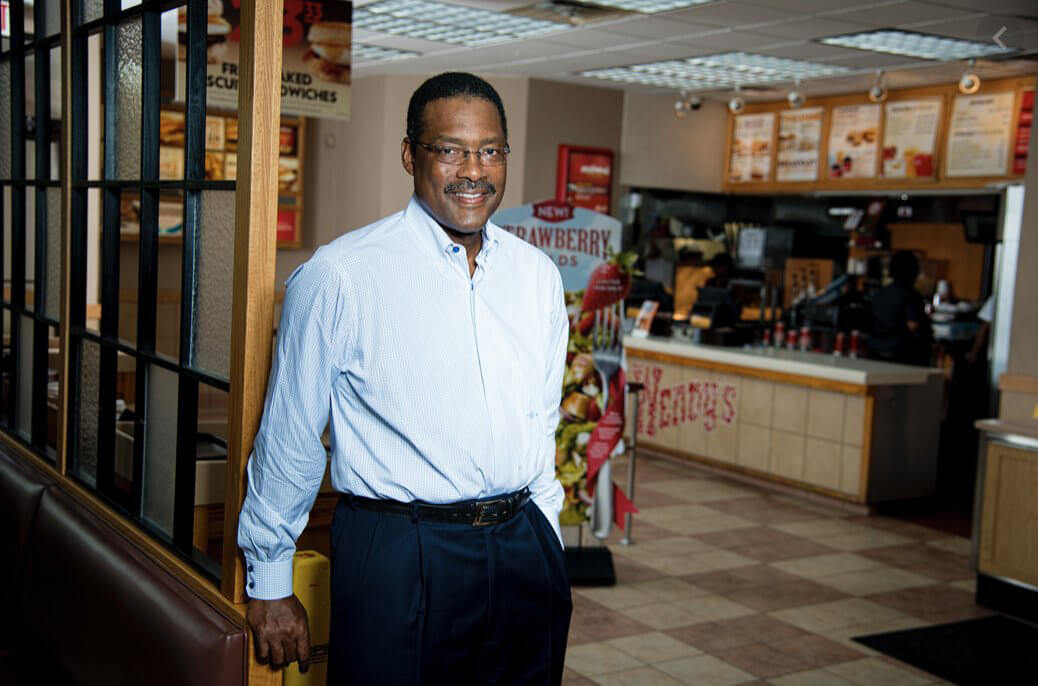 During his entire career, Bridgeman never earned more than $350,000 in a single season, Yet, he parlayed those earnings into a real estate empire. During the offseason, he took a job working at a local Wendy’s where he personally learned the ins-and-outs of the fast-food business. His experiences were enough to convince him to parlay much of his earnings into franchise locations. Following his days on the hardwood, Bridgeman invested in more than 120 Wendy’s locations and eventually added Chili’s to his portfolio. A lucrative bottling rights deal with Coca-Cola allowed him to exchange his fast-food stake and now he owns exclusive bottling rights in a number of states. Today, his net worth is north of $600 million.

While Bridgeman is an under-the-radar story, there are a few well-known ones. John Elway is forever a legend in Denver, Colorado because he brought the city and the Broncos franchise two league championships. While he was a QB for the team, he began investing in local car dealerships, an initial string of which he sold to AutoNation in 1997 for a cool $82.5 million dollars. Today, he is an Executive Vice President of football operations for the Broncos but he still gets income from another series of car dealerships around the metro Denver area as well as two steakhouses under his name.

📱 Today’s Stars Were Born With Tech in Their Hands

Gone (or, much more limited as the go-to-option) are real estate portfolios. Instead, technology has entered the equation.

Many of today’s brightest and highest-paid sports stars all share one thing in common. They came of age and have grown up constantly surrounded by technology, the internet, and mobile devices like smartphones and iPads.

Like their counterparts who have gone on to forge new tech companies worth billions of dollars, these stars have seen how technology has changed the way they communicate and given them incredible opportunities to grow their personal brand on these platforms and share stories with an engaged audience. 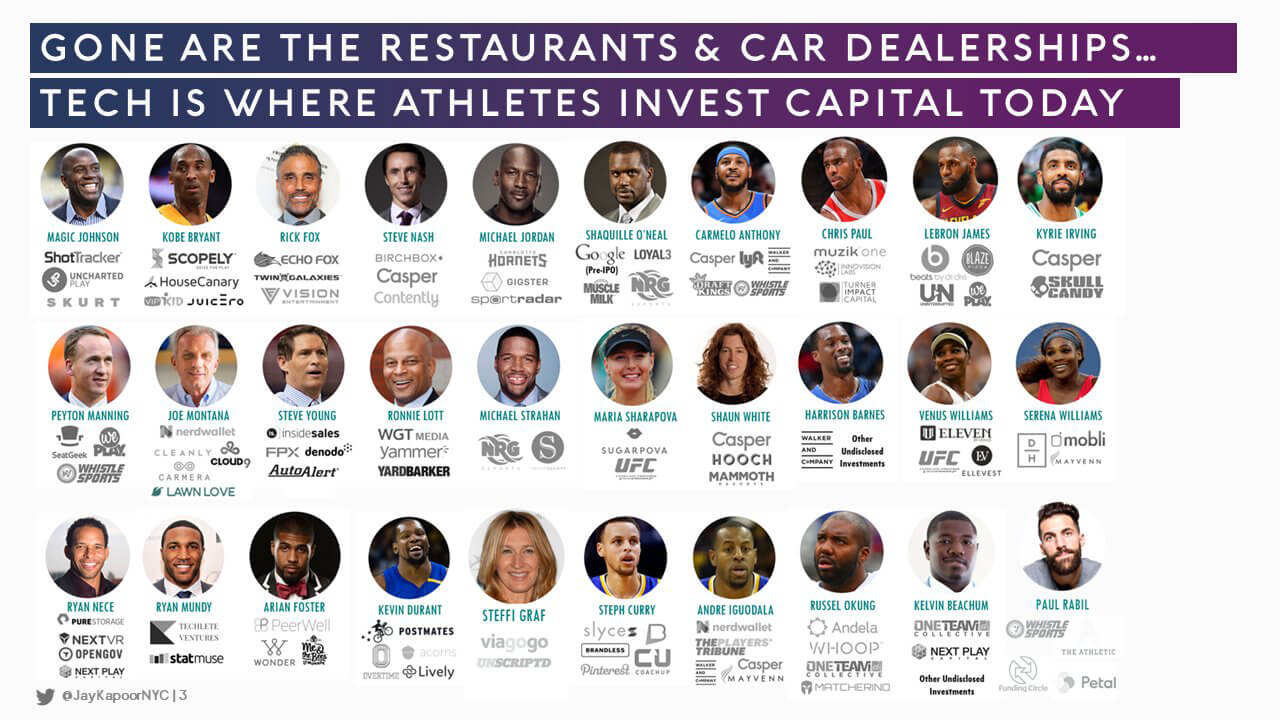 As the years progressed, superstar athletes and mega-contracts have changed the game dramatically.

While endorsements have recently and will continue to be part of minting money for the biggest of athletes, there has been one significant change to the way we consume sporting events that have helped create even more wealth — mostly for team owners, but also for sports stars.

Let’s take the National Football League as an example.

Go back to the 1997 NFL season. There stood John Elway atop the sporting world as he hoisted his first Lombardi, snagging what would’ve been Brett Favre’s second Super Bowl title. Back then, NFL broadcasting rights were worth a paltry $1.1 billion dollars. A pittance compared to the projected $12 billion in revenue coming in 2021. Back in the 1990s, there were just a few players in a pre-DVR world. Now, when live sports are one of the only shared experiences we love to watch live, there are almost a dozen competitors in the streaming space across traditional terrestrial television, streaming, and mobile including the likes of NBC and newcomers like Amazon, Facebook, Twitter, and Google.

Media rights have created a lot of wealth. Like, a ton. But from those media rights, trickles down a lot of other opportunities for revenue for leagues, owners, teams, and players. Gate revenue, sponsorships, and merchandising accounts for additional tens of billions of dollars respectively.

League structures have drastically changed in the last few decades, and while owners are raking it in, much more has made it down to the players, including both stars and even roleplayers.

Now, here’s where the tech comes into play.

Because all of today’s athletes have grown up in a digital-first world, they’ve also had the ability to broadcast their experiences, share their stories, and grow audiences. And, they can also find the tech they want to personally invest in that solves the problems they’ve experienced in their professional career. Just this month, a number of athletes including Stephen Curry, Paul George, Rudy Gay, Kyle Rudolph, and Michelle Wie invested in Tonal, an at-home smart fitness machine that uses electromagnetic resistance to help train.

The engagement level for fans and players has given them access to their own network-effect that reaches everyday fans like you and me but also reaches important voices like industry movers and shakers, startup founders, tech moguls, and VCs.

Today, superstar athletes can use their earnings to help solve real-life problems.

One of the biggest misconceptions is that these big-time stars are just tossing their money into the new, emerging tech or the things they see that are fancy and fleeting.

That couldn’t be any more misinformed.

Problems that have traditionally taken a few decades or generations to solve have been fixed by technology in the form of devices and apps. So, athletes have had a lot of time to consume this tech, be exposed to new and emerging technologies, and share these things with vastly growing audiences.

“Most of the people think celebrities and athletes are kind of dabbling here and there,” said Rudy Cline-Thomas, Andre Iguodala’s investing partner, and head of Catalyst, part of Comcast Ventures.

“Tech is hot, so they’re jumping in, and it’s the fad of the day…But people don’t realize how long these guys have been thinking about working on tech, building connections, getting smart.”

Be sure to check out our recent webinar that explores how two former professional athletes — NFL players Ryan McNeil and Ray Farmer — transitioned from the gridiron to the world of startups. Turns out, there are some super fascinating parallels between the rigors of being an athlete and the skills they have learned to build something new in the world of startups and technology.

While they can certainly invest in meaningful technology in the form of exciting passion projects and companies, they also are increasingly having a say in social and humanitarian efforts that are using tech to make the world a better place.

No matter what happens on the court or playing field, it will certainly be entertaining and fun to watch these superstars participate and invest in smart, innovative technologies and change the world. Or, we can all get in there and help ‘em.

Perhaps, the sporting superstars we follow will come up with their biggest titles by the smart and innovative technologies they have a hand in shaping that will be one of the coolest things to watch from the sidelines.

Here are some familiar names and some of their investments: