The Missing Links: The Path to Golf’s Comeback

The sheer amount of change in the world of sports has been surreal. Each sport has different dynamics and considerations when it comes to levels of opening and engagement. In these last few months we’ve tracked how our partners have adapted on a daily basis.

For the game of golf, recent live events with pro athletes banding together to raise money for charity have already smashed records. A match with Tiger Woods and Phil Mickelson instantly became the most-watched golf telecast in cable television history.

When we step back, though, we can place specific sports under the microscope and look at how they’re changing, innovating, and progressing to bringing back live sports. It’s an incremental and phased approach, but we’re keying into the innovations that are driving these changes and in many cases, making the sports safer and connecting players, fans, and athletes to technology in new and exciting ways.

The sports world and those viewing at home got some semblance of normalcy when two major golf events were scheduled.

Golf took cues from other sports like the NBA’s HORSE tournament and NASCAR’s virtual e-racing to create some of their own tournaments. With the game’s biggest players and the help of celebrities, golf has made a public re-emergence onto television over the course of the last few weeks in a bid to raise money for charitable causes.

The first tournament was a “skins match” with the World’s top golfer, Rory Mcllroy and Dustin Johnson teaming up against Rickie Fowler and Matthew Wolff back on May 17. Together, both teams raised more than $15 million dollars for COVID-19 charities but the match was won by Mcllroy and Johnson.

The first live golf broadcast to fans in more than two months drew an average of 2.35 million viewers across NBC’s network of golf channels and the PGA Tour streaming platforms.

“Sunday’s telecast helped raise awareness for the American Nurses Foundation, CDC Foundation and Off Their Plate, three organizations on the frontlines of COVID-19 relief efforts. It’s a credit to the PGA TOUR, corporate partners and the players for making this event a terrific success,” said Pete Bevacqua, president, NBC Sports Group. “On top of the funds raised for these charitable entities, audiences were treated to their first look at Seminole Golf Club, which ultimately was the fifth star on Sunday in its television debut.”

The next tournament featured another pair of the sport’s biggest stars in a rematch of their previous one-on-one match: Tiger Woods versus Phil Mickelson. The catch — Tiger and Phil both chose superstar NFL players to join them. Tampa Bay Buccaneers QB Tom Brady played with Phil and Tiger chose comedic wunderkind and former Colts and Broncos signal-caller Peyton Manning.

Rain soaked the course at the Medalist Golf Club in Hobe, South Florida making things interesting all day. Announcers, already separated by six-feet, were partitioned from each other by plastic guards underneath a tent. 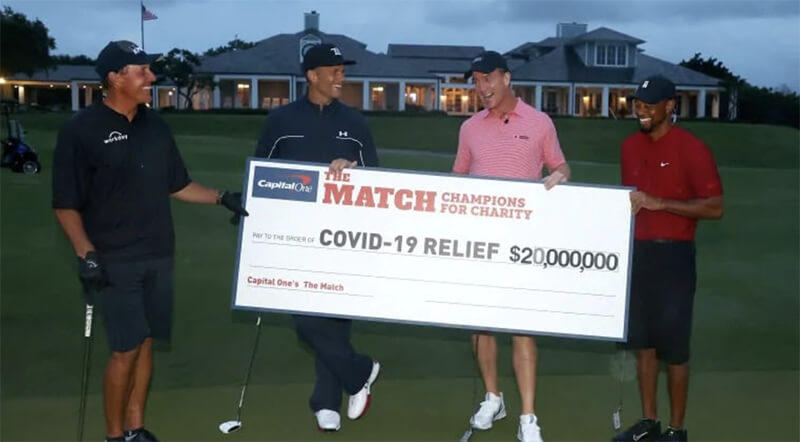 The course was empty with the exception of a handful of on-the-ground camera crew following the players hole-to-hole. Each player was mic’d up and the golf carts were covered in small cameras to capture them moving, although the rain seemed to disrupt some of the equipment, and thereby, the ability for announcers to actively engage with them live.

Each player rode to the next spot in their own, custom-designed golf carts adorned with Tiger’s logos and match sponsors. Each golf cart was given away in a raffle after the event.

Early on, analyst Charles Barkley, chatted it up, joking with Tiger through the plastic tenting as Woods headed to the first tee box in his custom golf cart.

The interesting point, though, was that this was an event which was set up in order to create a dialogue between all the players and the announcers. Much of the conversation about how fans engage with sports when there may be no fans has fallen to how close we’ll be able to get to the action and the athletes. Earlier this preseason, the Chicago Cubs featured some players who were mic’d up to surprisingly successful results during a game.

Bridging the gap between the field and home with a sonic connection to the action may prove to be a big win for a league who can find the ability to tap into this audio tech. 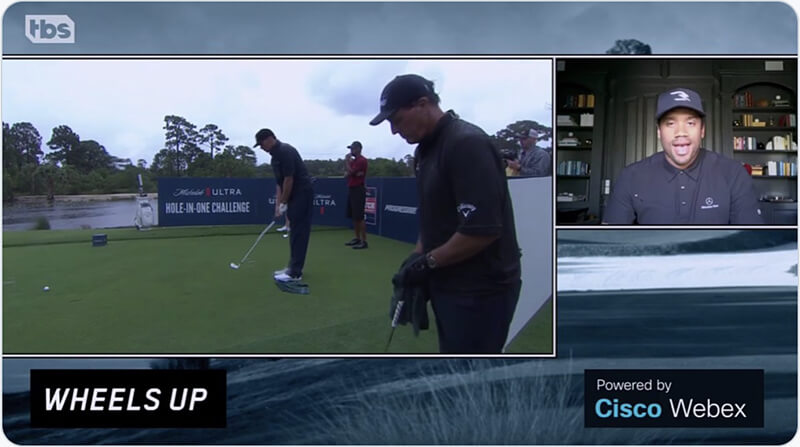 Big-time athlete guests appeared on the broadcast through the course of the game. Seattle Seahawks quarterback Russell Wilson appeared during an interview (from afar, powered by Cisco Webex, of course) wearing a Mercedes-Benz polo, despite the event being sponsored by Audi. Wilson’s shirt was tied to a promotion slot for a Wheels Up sponsorship, worth about $311,000 in equivalent advertising. 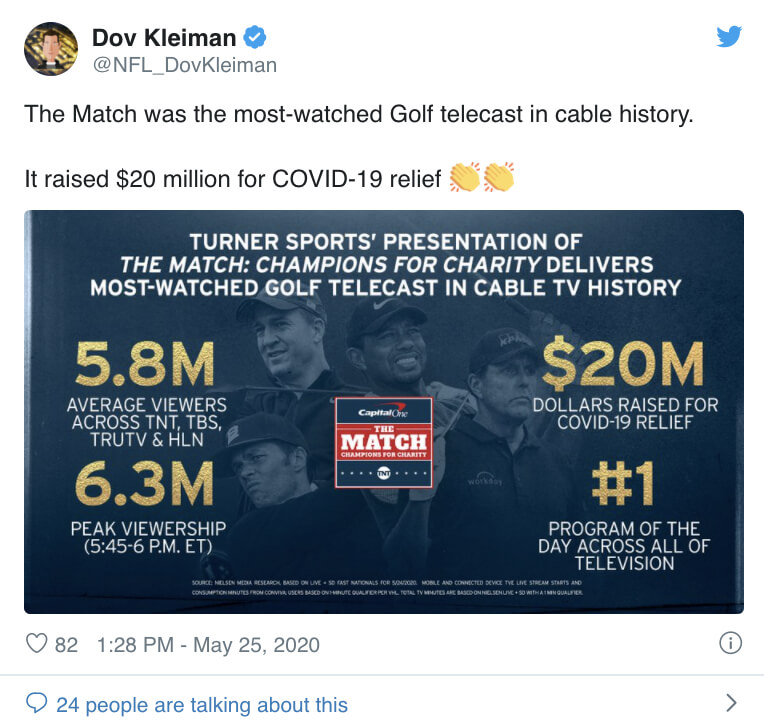 Advertisers had to be happy with the one-day event’s results. Tiger vs. Phil garnered an average of 5.8 million viewers across cable, making it the highest-watched golf event ever broadcast on cable TV. Social impressions indicated that fans were tuned in from their mobile devices and social channels. It became the day’s top topic on Twitter and Bleacher Report said they saw 38 million video views on their digital platforms. 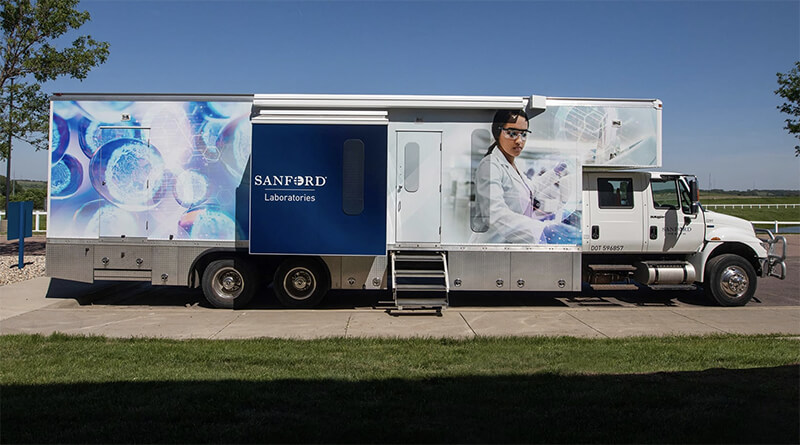 Turns out the PGA didn’t have to look far to find their official testing partner. They were able to work with tournament sponsor, Sanford Health, one of the largest health systems in the country, to deliver on-site testing and support for all the tour events.

Every major sport that is in the process of returning is doing so with deliberate and meticulous research and planning to consider the safety of all those who come back to the action.

The PGA Tour is no different. In advance of their first tournament of the revised season at the Charles Schwab Challenge in Texas, players and participants have been briefed with multiple documents of safety enhancements and protocols made to keep everyone safe.

Inherently, golf is already sort of a socially-distant sport. Aside from the major tour events loaded with spectators, golf was already one of the sports that started to return to communities that felt the game was safe when protocols were put into place. Some local courses have even been forced to innovate in ways that may have implications in the game for years to come. For example, in order to keep golfers out on the course safely, they’ve tapped new products like single-rider golf carts. Now, manufacturers including Phat Scooter and Finn Scooters may have a door into sculpting the game of golf with their new breed of electric carts and scooters. 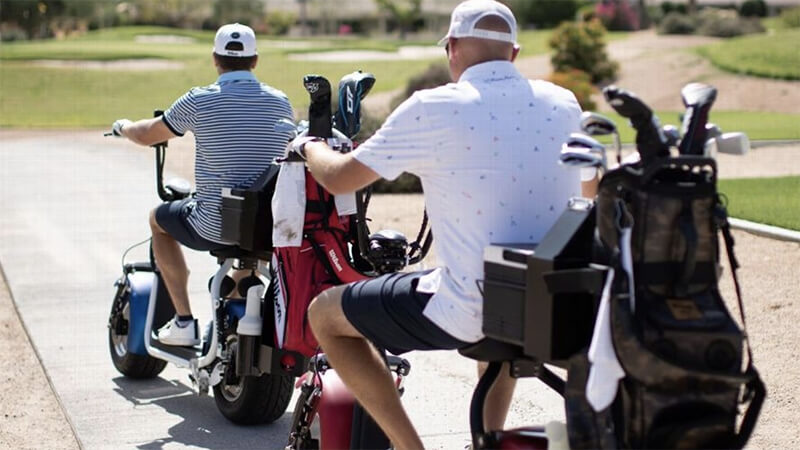 Players will face a layered approach to the games’ return with loads of testing. All players and their caddies will be tested and answer medical questions including temperature readings and nasal swabs that will begin before they arrive, and continue after they get there.

No matter how detailed major sports safety precautions are, the one major component will be how much testing is involved. Players, officials, and even family members will be put through rigorous testing protocols well into the future, even as life begins to return to some sense of normalcy.

How quickly major sports returns may be dependent on current or local relationships with medical providers or tech partners who can help them put plans into action and return to sports in the safest way possible.

And, for fans at home or playing the game on their own, it will all come down to the companies and products that are created during this time to meet our most urgent safety needs to address the pandemic, while also looking to the future about how they can make the game better, closer, and safer.