The Last Dance and How It Revitalized A National Audience

It’s rare that a television event captures the attention of an entire country.

Of course, comparing a universe with hundreds of television stations to the days of network players, large-scale events and sports are the live appointment viewing that continue to draw the biggest viewership. Things like the National Football League’s Sunday Night Football, the Super Bowl, or the NBA Playoffs.

With a lack of competitive sports, the Michael Jordan documentary, The Last Dance, the ten-part series produced by ESPN and Netflix have captured the attention of sports-hungry fans, a new generation of basketball fans, and nostalgic witnesses to one of sports greatest players and one of its most revered dynasties.

This is a snapshot of what Google Trends shows for search volume for the term: Michael Jordan.

In Trends, when a keyword hits 100, that represents peak search volume meaning that on April 20, Michael Jordan was a dominant search keyword across the world.

The series was originally planned to be released around this season’s NBA Finals, but with the stoppage of sports, fans began clamoring for something… anything sports-related to binge. With the lack of real game action, networks re-aired classic games, debated topics endlessly on studio programs, streamed esports events, and even discussed marble racing and Russian table tennis.

To say the least, The Last Dance has absolutely taken control of the sports narrative and our larger cultural dialogue.

During the premiere The Last Dance owned, on average, 25 of the 30 top trending topics on Twitter, it was part of 9 million content engagements on other platforms and, that Sunday evening it was also the top Google Search term. The post-show program helped boost the social engagement video viewership by 3.5M viewers.

Talk about owning the narrative.

For television numbers, the two premier episodes ranked as the most-watched original content on ESPN since 2004, and was second only to a telecast of the National College Football Championship game last year.

The origin story of the series goes back to the legend of the Jordan tapes. Rumors swirled around that Jordan’s final season was taking shape in 1997.

NBA Commissioner Adam Silver dispatched NBA Entertainment producer Andy Thompson to follow Jordan and the team in what proved to be a historic and tumultuous season.

It was no simple task.

Jordan had famously protected his image and access for his entire career, but the team was able to work out an arrangement to follow the team during that 1997-98 season with unparalleled access to Jordan from team huddles, post-game locker rooms, and practice facilities.

In order to seal the deal, an interesting arrangement had to be made — something many documentary producers would be hard-pressed to agree.

The agreement was that nobody would use the footage without Jordan’s permission. And, Silver kept the film hidden deep inside their New Jersey broadcast library. That meant nobody could touch it, or be privy to its location, not even producers.

There was no negotiation whatsoever, Adam Silver acknowledges. “All I said was, ‘I’m sure there’ll be a tough negotiation at some point, but we don’t have to have it now.’ Because, first and foremost, we have to capture the footage.”

When all was said and done, over 500 hours of footage sat unused for nearly two decades.

The entrypoint for the film was the changing viewing habits of Americans coupled with new changes in how documentary films were produced. When Bill Simmons began to create his 30 for 30 series, he showed that sports fans desired serious filmmaking, albeit in short bursts.

Then, Netflix was able to show that binge-watching translated across film genres into documentary. When Making A Murderer premiered in 2016, the blueprint was laid for producers to begin thinking about creating binge-worthy, in-demand long-form projects that spanned an entire arc of episodes.

One of the more interesting things to come from the Jordan documentary has been the clever repurposing of an old SportsCenter highlight package that has been spun into a contemporary ad placement, voiced (then) and today by Kenny Mayne.

To say the least, it’s lit. 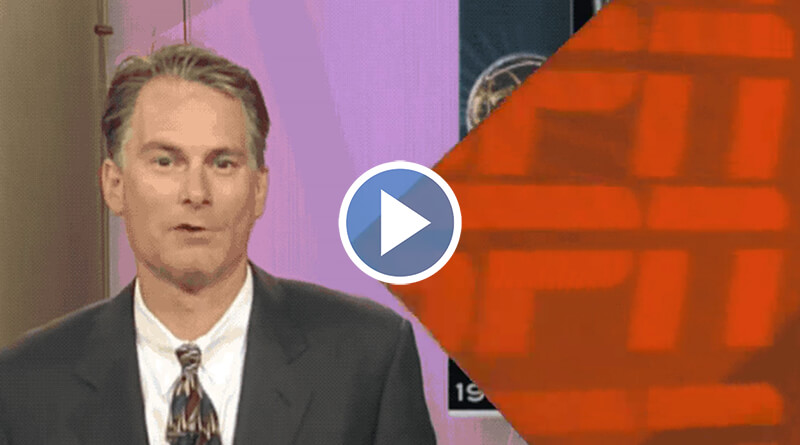 This pandemic has forced a lot of creative thinking in how ads can work, and more importantly, how productions can even shoot them.

According to insiders at ESPN, creatives were initially focused on getting Mayne to do man-on-the-street interviews with Bulls fans in Chicago but the pandemic forced the team to reboot their ideas.

Eventually, they realized they had an opportunity to match the stylings of the film’s late 90s footage with SportsCenter clips.

Of the three exclusive advertisers for the series (including Facebook and Reese’s), State Farm wanted to continue to make the ad spot happen. Faced with the option of using a more contemporary, continuous storyline through branded content with State Farm or going a more interesting, fun route, ESPN and the agency, Optimum Sports and Translation worked with Mayne, who was an anchor during the late 1990s when the Bulls dominated and is still working there today.

The creative inspiration and the truncated timeline show what could be a new future for advertisers, one where they’ll be rewarded for nimble production and quick-thinking.

“I think we’re all learning in this moment how agile we can be as creators,” explains Lisa Valentino, an executive for Disney Advertising Sales. “What would normally be an eight-week process to create a special ad has become a 48-hour window.”

One of the most profound angles of this film has been that a large majority of young stars watching it never saw him play live. And, that’s also the case for a broad cross-section of the NBA’s younger fanbase who also have only seen him play on highlights or YouTube replays. This film has given them an entire storyline that supplants the recent dynasty they know as the Golden State Warriors and uses one exciting season as a storyline to show all the incredible feats that the team accomplished during a time when there was no social media, no digital phones, and the internet was largely a portal accessed through 56kpbs dial-up.

Rarely do networks listen to the demands of their viewers in ways that change the programming landscape. But, without live sports, ESPN realized that their options would be limited. There’s only so many games of horse to go around and NBA 2K tourneys to watch.

So, when the network entertained viewer’s desires to bring the Jordan documentary to the mix earlier than originally planned, it represented a big win for both and created a shared experience for legions of sports and NBA fans alike. The logistical challenges of finishing a documentary remotely and working on ad-hoc creative commercial campaigns in support of the program show that, just like a lot of other professional verticals, work can be accomplished regardless of location. And, for the current generation of sports fans, we’ll all be figuring out what athlete or team will take the role of starring in their own Jordan-esque documentary in the future, what exactly that will look like, and what medium we’ll be watching it on.

Perhaps, it will be broadcast onto our coffee tables in 4D or piped directly into our glasses. Perhaps, there will be something else that we consider vintage that will bring new viewpoints. After all, aren’t we constantly in a cultural shift?