It was a normal Saturday evening like any other for Lawrenceville, Penn. resident, and grandmother Meg Burkhardt. She was at the North Park waiting her turn to play Pickleball when she suddenly was thrust into a two-on-two match with three other much younger, incredibly fit gentlemen.

Soon, the court fence started to draw onlookers and photographers. Who were these ambitious Pickleball players? She asked one of her friends to fill her in on what she thought was a joke, only to learn that she was playing alongside a large chunk of the starting lineup for the Pittsburg Steelers. 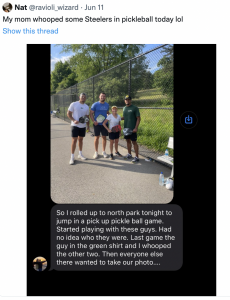 “He just busts out laughing, and he was like, ‘That’s pretty much the starting Steelers lineup!’ They were so great, I can’t even say that enough. They’re the best ambassadors the city of Pittsburgh could have,” she told a local news affiliate.

A series of viral tweets from one of the Steelers, all-pro linebacker TJ Watt, brought a spotlight to one of America’s hottest sports. Along the way, his post highlighting the playing proficiency of a local grandmother racked up more than 80,000 likes on Twitter.

The Origins of Pickleball

The sport has origins dating back to 1965 when three parents came together to create a way to keep kids entertained when they were out of school. It’s a blend of other familiar sports, including badminton, table tennis, and tennis. Played on a court that is the same size as a badminton court, it most closely resembles tennis and can be played by almost anyone at any age. The game can move quickly and has simple rules that keep the sport moving swiftly.

Connecting Fans and Pickleballers with Tech

Pickleball courts are springing up in neighborhoods and parks all over the country, but there are a handful of entrepreneurs who are seeing opportunities with brick-and-mortar retail operations.

One example is The Pickle Shack, an Ohio indoor facility that just opened in May with six courts and a membership program that allows players to engage in the sport day or night; in fact, courts are open 24/7. Already, there are plans to expand to 20 more courts.

Dave Ganim, the owner of The Pickle Shack says it is about time that people in his state get a chance to play one of the most popular sports in the country.

“This will be a huge coup for Delaware County, Iowa, which has a huge contingency of pickleball players,” Ganim told a local newspaper.

The location includes a pro shop so players can buy equipment and gear, and they intend to hold summer camps, clinics, private lessons, and leagues that host tournaments.

Ganim is also introducing some unique tech into his location.

Working with a company called Connexa and tech called PlaySight, their teaching and matches are captured with video that can be shown to players or even simulcast in the location to other patrons. That same video tech is already being used in basketball and tennis, the latter of which seamlessly transitions to pickleball naturally. Because of the quality of the courts—playing surfaces are made with cushions and the highest quality materials, and the ability to record and digitally present lessons and matches to players, this facility is considered one of the best in the country.

The Pickle Shack is not going to be the last cutting-edge place to play and will likely be a blueprint for other regions and entrepreneurs across America.

“It’s huge and growing every day. It’s what racquetball was back in the 1980s. I traveled around playing competitive racquetball, so I’ve seen this all before. (Pickleball) is going to be even bigger than racquetball was,” Ganim said.

Pickleball is the Fastest-Growing American sport

He isn’t wrong. Pickleball is having more than a moment.

According to USA Pickleball, adoption grew by leaps between 2021 and 2022—up 14.8 percent. That amounts to almost 5 million players in America, many of whom connected to the sport late in the pandemic. More than 1.3 million of the sport’s players hit the court more than eight times a year.

Many consider it an “older” sport—half of the best players are older than 55— Pickleball is extending its roots into younger generations of players, which bodes well for continued growth, expansion, and marketability. Like almost every other mainstream sport, the biggest challenge for Pickleball’s governing body is getting paddles into children’s hands as early as possible.

The Association of Pickleball Professionals (APP) has a youth foundation that brings nets, balls, and other equipment to elementary schools that align with APP tour stops to educate children about the sport and get them involved early.

Success in the sport is trickling over into additional markets, including sportswear and shoes. FILA, a sportswear and tennis brand, is not content to sit on the sidelines watching Pickleball’s explosive expansion. They see growth in the market, measured by increased footwear sales. They also signed deals to be the apparel and footwear supplier for the Margaritaville USA Pickleball National Championship and other emerging pro tournaments.

Putting money where the Pickleball is

This past Memorial Day, the Association of Pickleball Professionals hosted the NYC Franklin Open, which brought more excitement about the sport to the massive New York audience. They held a five-day tournament at the iconic Billie Jean King National Tennis Center in Queens, drawing over 800 players across five countries and paying out more than $2 million in cash prizes to athletes.

When your sport hosts a big-money tournament at one of the most renowned facilities in tennis, you know your sport has made an impact.

Want to make an impact on the future of sports tech? We are looking for the best and brightest startups to apply to our 2023 accelerator program. Learn more here.