How Fans, Players and Teams Are Staying Connected

Before we begin today’s article, we ask that you please stand and remove your hats as we honor our nation with the singing of the National Anthem, performed (from home) by Chicago Blackhawks very own, Jim Cornelison.

While Jim has to worry about a noise complaint from his neighbors, we’re able to dive into a topic that has become very interesting the last few weeks: How fans, athletes, and teams are connecting with each other during this pandemic.

Without a doubt, players yearn to get back to their respective games and fans are clamoring to file back into stadiums to see them. Absence not only makes our collective hearts grow fonder, but it’s allowing creative ways for teams and their players to stay connected in these uncertain times.

Here are a few interesting ways these things are happening as we speak:

🥰 Keeping us Dreaming, From Afar

Opening Day was supposed to be our annual journey from the doldrums of winter to the beauty of spring. A season of renewal. And baseball. Instead, the pandemic has kept us inside and the ballparks shuttered. 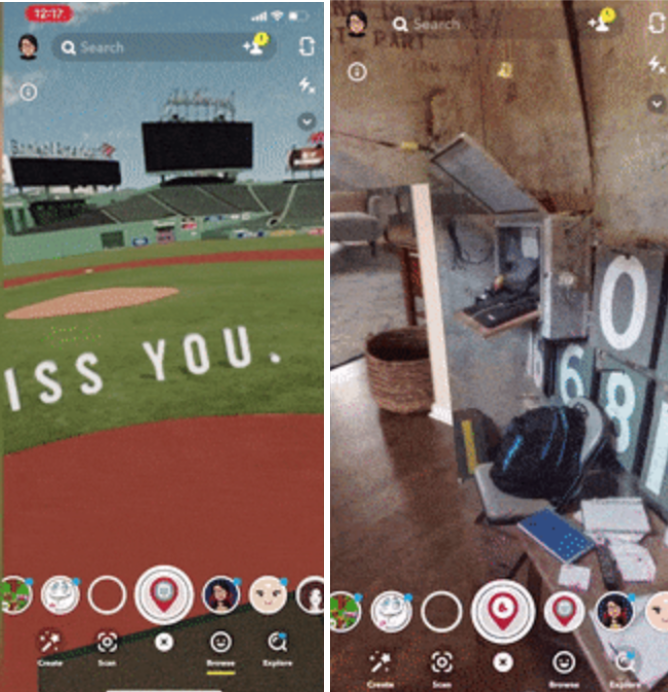 The Boston Red Sox kept their fans dreaming just a bit by allowing them to visit the park from the comforts of home. Through Augmented Reality (AR) overlays in Snapchat, fans could ‘step inside the park’ and receive a warm message from the team and take a peek behind the belly of the Green Monster, home of the team’s legendary scoreboard.

🚪A New Door Opens to the Past

With a lot of spare time and no sports, some teams have gotten very creative about packaging up highlights to keep fans engaged. On April 3, Arsenal appears to be the first team to show this clever edit. Since, teams have created slick highlights hidden behind doors that bring fans back to some of the team and players greatest plays. 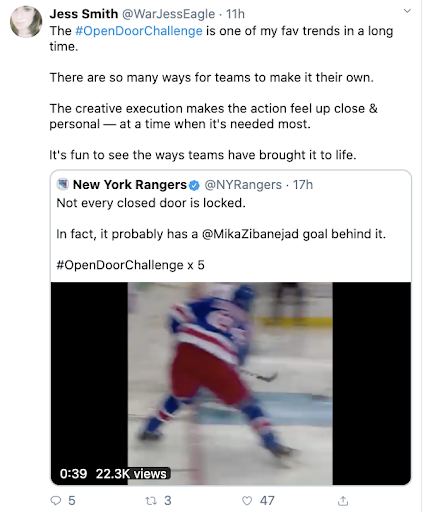 The upcoming NFL Draft was supposed to be the splashiest yet. Boats were going to take draft selections to the stage across the water in front of the Venetian. Crowds would be everywhere, up and down the strip. This would be a grand entrance to welcome the NFL and the Raiders to Las Vegas. Now, the league is finalizing plans that would turn NFL team owners and coaching staff into everyday-Joes, drafting from their homes. EA Sports will celebrate prospects who won’t get the chance to get on stage by crafting a virtual moment of them officially joining the NFL. EA is working with players who will tell them exactly how they intend to honor that moment with the commissioner on stage for fans to see across the globe.

As NBA players are quarantining just like us regular folks, they’re facing many of the same challenges with keeping their workouts going. Milwaukee Bucks star Giannis Antetokounmpo doesn’t have a basketball hoop at his home, so he has focused on other exercise regimens. When the pandemic shut down the NBA season, Houston Rockets trainer, Willie Cruz got a suggestion from the team’s digital content team to start an at-home training program via video. The workouts Cruz created were designed for a shorter-term pause and geared towards encouragement and relatability. Turns out, the team realized that it would be a perfect thing to send to fans stuck at home wondering how they could stay motivated. In late March, the team published their first workout to their 22 million social followers to teach them simple stretches they can do from home. 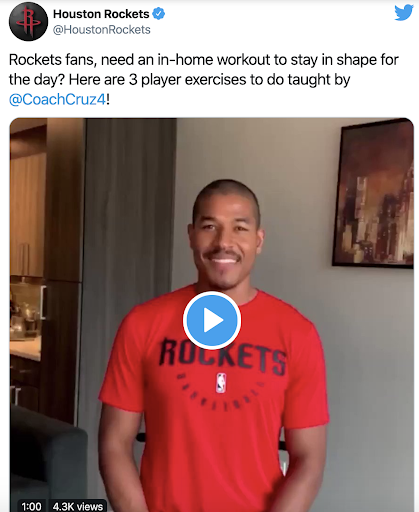 With the lack of live, televised sporting events, programmers have really had to think about how to adjust their programming schedules. We’re not sure how they did it with decades of games to choose from, but MLB curated their 30 must-watch games fans can watch for free on their vault.

🏟The State of Fan & Player Engagement

Technology is changing the way we watch and consume sports.

Professional sporting teams and leagues have made significant investments in dedicating resources to improving this experience. Much like any brand or company looking to be successful, the focus is on building and maintaining relationships with the consumers. For sports, social media, television, and emerging platforms are helping build stronger relationships with their fans.

According to a 2019 survey by Scrum Ventures, 78 percent of people acknowledged that experts, investors, team founders, and league professionals said fan engagement technologies like live-streaming, esports, and content platforms would help drive powerful results for the coming year.

Long before the pandemic, technology was changing the way we enjoy and engage with sports. The absence of sports during this global crisis is underscoring the desire both fans and players have to connect with each other off the court. A stronger relationship with fans helps create value within a sporting organization in a myriad of ways from adding subscribers to digital platforms and providing valuable data about how fans interact with players.

“Fans want to be on that field. They want to be their favorite players.” – Chris Kluwe, former Minnesota Vikings punter.

Before the pandemic, the next five years were critical to building and strengthening the conduit by which fans and players engaged through live video content, team-generated content, fan-generated content, and VoD. With increasing downtime, many of the ways that fans and players are connecting now will likely speed this time window forward. When sports return, the pent-up demand to reconnect and share in the joy of the game will be bigger than ever before.