How Fans Are Returning to Stadiums and Live Games

As summer approaches, professional sports have turned a corner.

Last year, athletes competed in bubbles and empty stadiums. Things are beginning to change as the trickle of fans is becoming more of a steady stream. The realization has arrived for teams, players, and fans that while live sports have returned, the experience will be vastly different than the one before the pandemic.

It’s clear the game needs all of us back. Athletes can tell you how incredible it is to hear the fans cheering, and the fans can tell you how great it is to see their favorite players while catching games in familiar environments with the sights and smells of the game.

So far, fans across the world have been heading back to stadiums to experience live games. Here’s a rundown of what we’ve seen over the past few months:

One of the biggest changes that will be driving every aspect of the in-game stadium experience revolves around going cashless. Since baseball has seen the most teams allow fans back to a major sport, it’s become a good litmus test to see how technology and safety advances are rapidly changing how many fans come back to the stadiums.

Today, 24 MLB teams are cashless and a handful are completely contactless, meaning that no cards or cash will exchange hands. In many instances, a fan can order food seamlessly from their mobile device without opening up a wallet.

In the NBA, fresh off a bubble postseason, most venues are much more limited capacity given how close fans used to be to the game. On television, NBA stadiums have advertising wrapped over seats for the first dozen or more rows and if fans are in attendance, they are extremely limited. A single team—the Oklahoma City Thunder—has no fans, while most of the league is operating around 20 percent or less of capacity. Again, like baseball, some of the in-venue operations are scaled back or entirely contactless.

This new trend is going to reshape how technology has quickly revamped the in-stadium experience. It used to be that it was a luxury to sit in the club section, order food with a concession worker and, have it delivered to you.

With stadiums opening up, there are no hand-held paper tickets. Even before the pandemic, the use of QR codes or mobile ticketing was accelerating, but post-pandemic, fans attending games will undoubtedly hold a mobile ticket to scan at the entry points.

The ritual used to be baked into sports fan’s routines. You could buy tickets directly from the team or at a secondary source weeks before the game, or even right up until it started. Then, teams would send out communication directing fans on much-needed information that would help make their game day easier—this being a critical component of the team-fan engagement experience.

Now, teams and fans paramount concern is safety precautions. Everything about getting to and from the ballpark involves safety protocols that have completely changed the in-game experience to be a swift and digital one. From entering the stadium to getting to your seat, the mobile devices we carry are ushering in a revolutionary period in sporting experiences. They will and we know they will. Dibz was already thinking about the concept of offering and selling unsold stadium seats and now coming out of the pandemic, they’ll be looking to strengthen their offerings and leveraging text messaging as a way to get fans into an instant upgrade. The technology that can riff off of the current gameday post-pandemic period will be the ones quickly adopted by fans and teams, alike.

As life segues back to whatever we consider normal, it usually involves filling out health screenings and temperature checks.

This is happening to some extent at professional sport stadiums either in forms that must be submitted via a mobile application or email or in-person. According to the Athletic, the New York Mets must “obtain and display proof of” full vaccination or a “negative test result from PCR COVID-19 or antigen test.” Currently, the Mets are allowing 8,492 fans into Citi Field, which has a capacity of over 40,000. 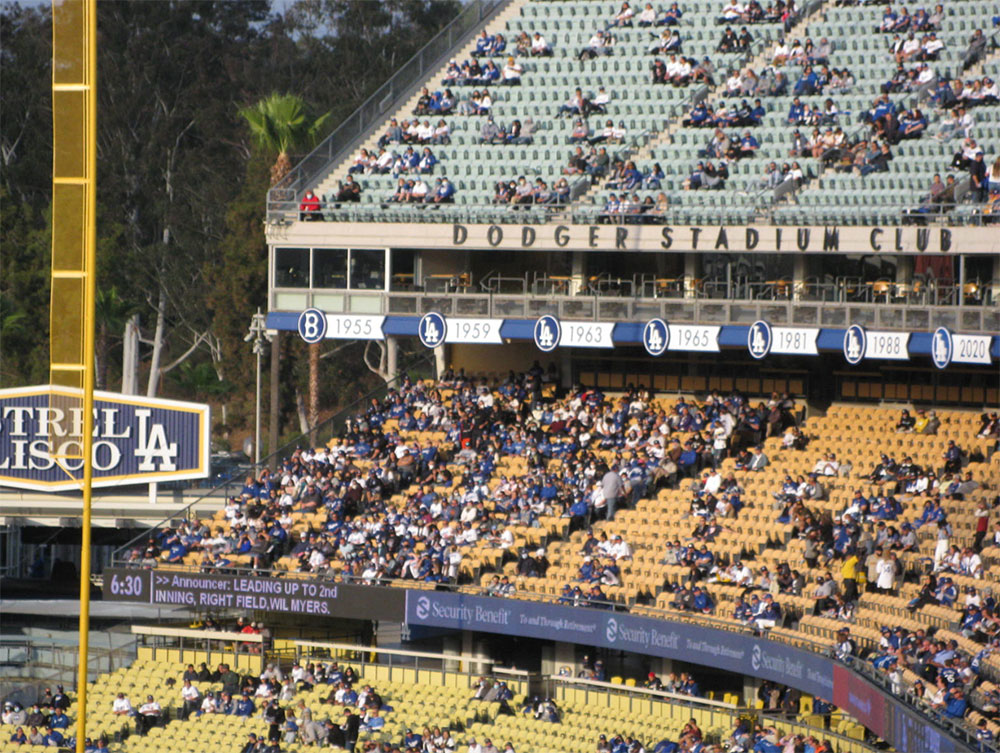 A view of sections 166LG and 168LG at Dodger Stadium, which accommodates vaccinated fans with no social distancing. Photo via Twitter: @ericstephen

As more and more folks receive vaccinations, some teams are getting clever with figuring out how to seat fans. Instead of sparsely-filled sections across a baseball stadium, the Dodgers are doubling their “fully vaccinated fan section” starting in May. They did a trial run and a loge section sold out 500 seats with prices over $121 per ticket. They plan to cap these sections to 1,000 fans and drop prices down to the $50 range for mid-week games.

There is a catch. Fans in the section will have to wear a mask, but won’t be expected to adhere to social distancing. The Dodgers are hoping to open up Chavez Ravine to full capacity in mid-June.

With fans coming back in larger and larger numbers, teams will look to get back on track with engaging fans in-person instead of completely digital and social channels.

Already, some teams are getting clever with how they promote their team and in-person attendance. The small-market team Oakland A’s currently allows 11,000 fans into their ballpark, but that’s not stopping them from using creative programming to get fans back. Parlaying on the meme-tastic commentary that has been fueling Dogecoin, the A’s offered crypto-crazy fans a chance to buy tickets using cryptocurrency. Fans also made suites available for one Bitcoin, both endeavors becoming the first Major League Baseball team to do a ticket offering using crypto.

Ticketing represents a pivotal starting point for the fan engagement relationship. Purchasing a ticket is the genesis of a fan relationship and an opportunity for the team to build from providing the content that can foster a relationship where the fan continues to come back to the stadium, interact with the players, and follow the team in other courses of life.

In the months to come, this arena of the in-stadium experience will be one to follow. Fans gathered in clusters or families attending events together will want to be given tailored packages. For many teams, their home games are the only opportunity to bring in the most engaged and passionate fans. No longer can teams sit idly by hoping fans will come streaming back, they’ll need to be creative, innovative, and engaging. Innovation has to touch numerous facets of a team, from the stadium operations to broadcast operations. Investing in these is imperative.

Ticketing startup companies that survived the pandemic have had time to think about new offerings: bundling offers, ala carte experiences, and other promotions. Frontline workers will see lots of opportunities to attend games and be appreciated and seniors and students will also see pricing that is accommodating and attractive.

With these ticketing deals also comes unique experiences and engagement opportunities that go far beyond the traditional in-game approaches that teams use to engage with fans, like contests, videos, and scoreboard entertainment. Look to see teams create unique experiences that cater to fans’ desire to get closer to the field and players like pregame batting practice, sideline tickets to watch an NFL team warm-up, or join in on an integral part of a pregame moment like the National Anthem.

It all starts with a ticket entry into a ballpark, and technology is quickly solving a lot of the immediate challenges that will get fans back safer than ever. Following these, expect innovations, product experiences, and other ways that technology will greatly improve the fan experience and better bring the fan back to the games and players they have missed so much.