How Fans Are Getting Closer To The Game

Something interesting happened in Mesa, Ariz. in March.

As the Chicago Cubs began another spring training exhibition game at Sloan Park, two of their star players, Kris Bryant and Anthony Rizzo, were hooked up with microphones. Mic’d up as they say in the business. Throughout the contest between the visiting Los Angeles Angels, Bryant and Rizzo carried on conversations with teammates, shared thoughts about the game, and interacted with opposing players.

What transpired quickly became one of the most discussed sports stories of March. In fact, announcers were still talking about it during a matinee Red Sox game this past weekend. It has become clear that the simple act of attaching a microphone to a player and getting a view into their world was something that both fans, players, and media have deeply resonated with. It allowed fans to see that fans were real people, and get a rare look at the live flow of a game and their instant reactions. It helped that both Bryant and Rizzo are both approachable and media-friendly.

It couldn’t have come at a better time. Right now, the sport is facing one of its biggest PR challenges coming on the heels of revelations of some players using cameras to steal signs. Micing up Cubs players created a wave of positive press but also started to show fans the ways in which the sport can bring the game closer to the fans. Through audio and camera technology, fans that were tuning in were able to hear players at moments that had previously never been played during a live game.

At times, Kris Bryant reacted to pitches and hits. “Get fair! Get down! Now, I’m tired.” Yet another time, he playfully reacted to an incoming pitch, “Oh my God, oh my God, oh my God…” And, he even joked about the sign-stealing scandal by trying to guess what pitch was on tap for him. 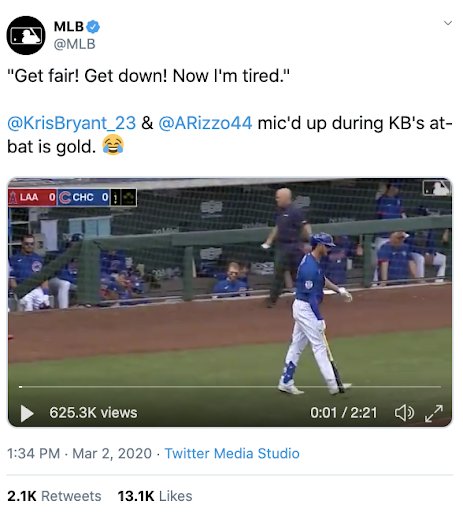 Baseball is full of idle moments that have traditionally been filled with the sonic landscape of the ballpark and the minituate of the game spliced together with storytelling and inside-baseball analysis from the booth. Naturally, many people are wondering if this could make its way into live, regular-season games.

Kris Bryant said it was one of the most fun games he’s ever played. “It was awesome, a perfect time to do it,” Bryant said. “Spring training games are normally relaxed. It was pretty cool to have two (players) doing it too.”

But, whether it can carry over to the regular season remains to be seen. Already, the precedent somewhat exists in other major sports. We’re seeing cameras increasingly get closer and closer to live game action. NBA coaches are interviewed between quarters and their discussions, and the XFL already features near-live reaction interviews with players on the sidelines. NFL broadcast typically features a prominent player from offensive and defensive positions with audio, and then queues up interesting tidbits during the broadcast. No matter what, it appears that MLB has a winner of an idea that received a lot of press. Now, it’s a question of how the audio and technology can be tied together in a way that brings fans closer to the sport than ever before, at a time when it may need it the most.

Tuning into a local morning drive sports show in Denver following the Chicago Cubs mic experiment, the hosts were fired up about how this could change sports.

A few of them were waxing nostalgic to a time that is almost unbelievable now. Go back to the late 1970s when sports fans were forced to read the morning newspaper to follow out-of-market team performance or excitedly tune into Monday Night Football to see if Howard Cosell chose their favorite NFL team for the highlight of the week.

It’s an unbelievable time to be a sports fan. The barriers between fans and players are shrinking. We live in a world where highlights, commentary, and video of our favorite teams and players are always a tap away from us.

The implications benefit everyone: Players, teams, and their fans. There’s a finite number of times a team can play games during their season and almost half of those contests are guaranteed to be on the road. Technology and social media are connecting fans to not only the games, but also the moments between them — practice, travel, and real life interactions. Revenue opportunities that were formerly limited to home games before are being realized in new ways. Players can grow and expand their brand to an always-on audience of fans beyond their home city. Likewise, teams can expand their reach to fans before, during, and after games. Instead of competing with attention measured in eyeballs, teams are able to tap into new revenue streams, create their own unique content, and publish places that extend their reach globally.

“The fewer barriers there are between athletes and fans, the more commercial opportunities that will materialize. The value in having fans relate to their favorite players is immeasurable.” — Brian Finkel, Deloitte Sports Research

An example of that happening in real-life is how some teams are capitalizing on social media to leverage partnerships to publish their custom content to fans no matter where they are.

Just look at how the Chicago Bulls are packaging highlights in unique ways: 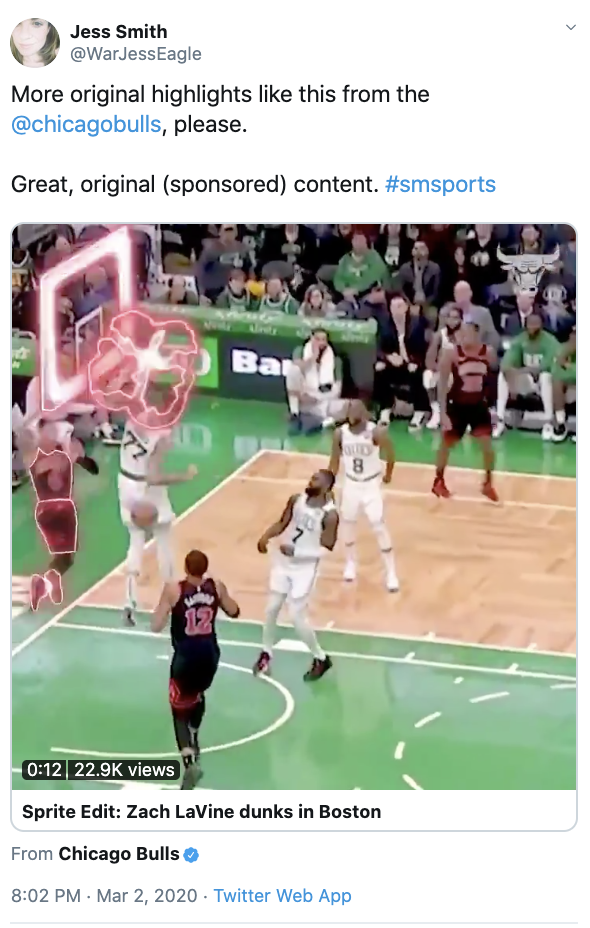 The Bulls are not only dominating in their partnership opportunities, but they’re leveraging content in emerging categories and platforms. They launched a team account on TikTok back in July using Benny The Bull as a main driver. Today, their two million followers are higher than any other North American sports team — and also the main accounts for massively followed sports like the NHL, MLB, and UFC.

The Bulls worked with partner, Chicago-based BMO Harris Bank to create special choreographed dances and challenges for fans using the hashtags #BullsBMOChallenge and as of March 2, the video garnered more than 1.2 million views.

So, what does this mean for the sports tech industry going forward?

Here are a few takeaways that can help you shape business, come up with a new idea, or model new products that will change the sports landscape between fans and players.

Innovative digital technologies that strengthen fan engagement through social media, no matter where they are will help augment fan’s demand to have access to unique content, data, and insights.