It’s one thing to root for the Olympic athletes representing the United States in Tokyo.

It’s an entirely different experience to be rooting for them because they’re our partners.

For the entire run of the Olympic games in Tokyo, we were in prime position to cheer hard for the best athletes in the world representing our unique partnerships with both USA Cycling and USA Swimming.

This was far from the usual Olympic experience.

While the signage in Tokyo said Tokyo 2020, we were a year removed due to the global pandemic. Families, friends, and fans alike were forced to root from home due to local restrictions put in place. Competition took an entirely new look as stadiums had empty stands.

Here is a look back at some of the coverage and results from the athletes of the cycling and swimming teams.

Keeping on Track with the USA Cycling Team

What’s so incredible about following the Olympics is that we got to meet athletes in sports that don’t always get the primetime attention they deserve.

For five years now, the members of the cycling team have been training and grinding in hopes of making it to Tokyo, and over the course of the games, we got to see them take flight.

In Tokyo, the Cycling Team won three medals, including a gold and bronze in Track Cycling.

Here is a list of some of the best articles highlighting the athletes and competition for the USA Cycling Team.

History was made as the Olympics’ exciting new sport, BMX Freestyle Park, handed out its first Olympic medals. Hannah Roberts finished second to claim the first-ever Olympic silver medal despite being a heavy favorite to win it all. She finished with 96.10 points behind Great Britain’s Charlotte Worthington, who took gold with 97.50 points.

Two-time Olympic medalist Jennifer Valente opened up the Izu Velodrome for the morning of racing, starting with the Scratch Race in the Women’s Omnium. Valente is a master of the Omnium, so we were due for some exciting racing. Valente marked her riders as soon as the gun went off, with Team GB, the Dutch, and Denmark all ones to watch. The pace started off slow, with riders waiting to see who would do the work early on. With three laps to go, the pace picked up, and the race was on. At the bell lap, Australia took the lead and made the attack. Valente stayed in the mix toward the front of the group. About five riders back, a massive crash took out seven of the twenty-person field. Valente put in her finish line kick and won the event, walking away with maximum points. With three more events left, that was a great start to the day for Valente.

There’s pressure coming in as the World Champions, but Emma White is proud of the team’s performance. “We came here to get more than the bronze, being the defending world champions. The rides today were absolutely phenomenal. We’re really proud of what we did today. The blistering rides from Germany and GB today show how competitive this event is getting. Although this past year has been full of struggles, we’re proud of how we competed.”

All five women on the Team Pursuit team have worked together through the highs and lows and have trained relentlessly together for the past three years. Valente explained, “We all live in Colorado Springs, and we all train together in Colorado Springs. So, we really know our team inside and out, and each individual person and what they’re capable of. We lined up today, yesterday, and this whole Olympics, relying on each other and being very proud.”

Chloe Dygert is no Simone Biles. Dygert is not the Greatest Of All Time nor NBC’s Face of the Games. Yet the Dygert bronze should be viewed with the same reverence as the Biles bronze. The two 24-year-olds were similarly gritty, coming through with medals about an hour apart in different sports and different venues Tuesday at the Tokyo Olympics. Ten months after a scary crash threatened her career, Dygert won the second Olympic medal of her career.

Louisville native Tom Neb is geared up to take part in his fourth Olympic Games. The Ballard High School and University of Kentucky graduate is at the top of his game but we won’t see him on the starting blocks at the Tokyo Aquatics Centre or sprinting down the track in The Japan National Stadium. Instead, Neb, who has been part of Team USA at the Olympic Games in London and Rio and support during the games in Beijing, is once again keeping Team USA rolling on the Olympic mountain bike course.

Across four primary disciplines including road, track and BMX, these were the athletes representing America in Tokyo.

Take for example these Instagram Stories from Track Olympian, Megan Jastrab who shared team triumphs and personal experiences in the team pursuit event. 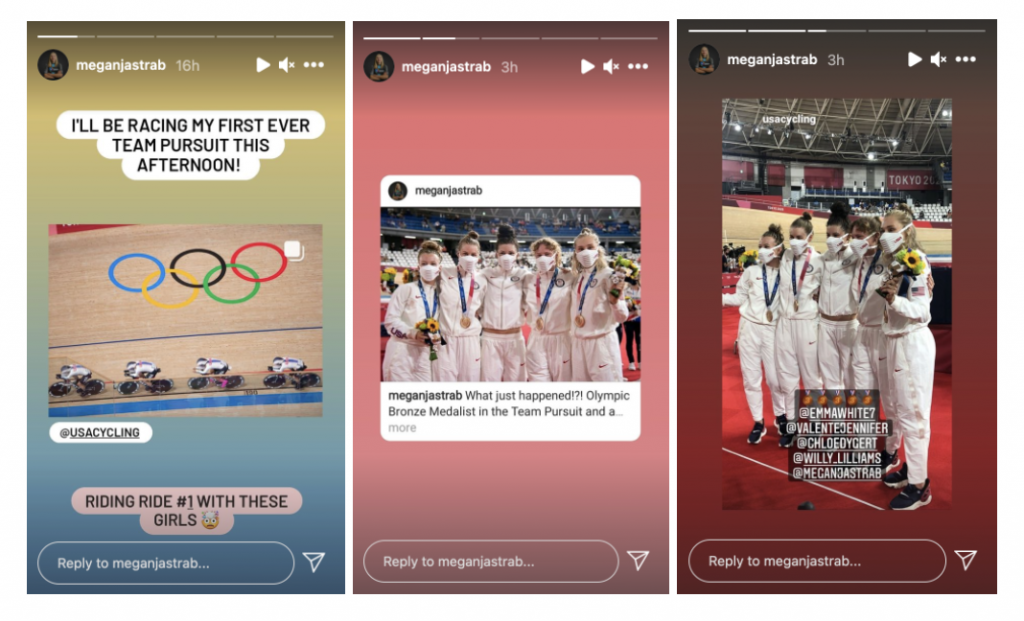 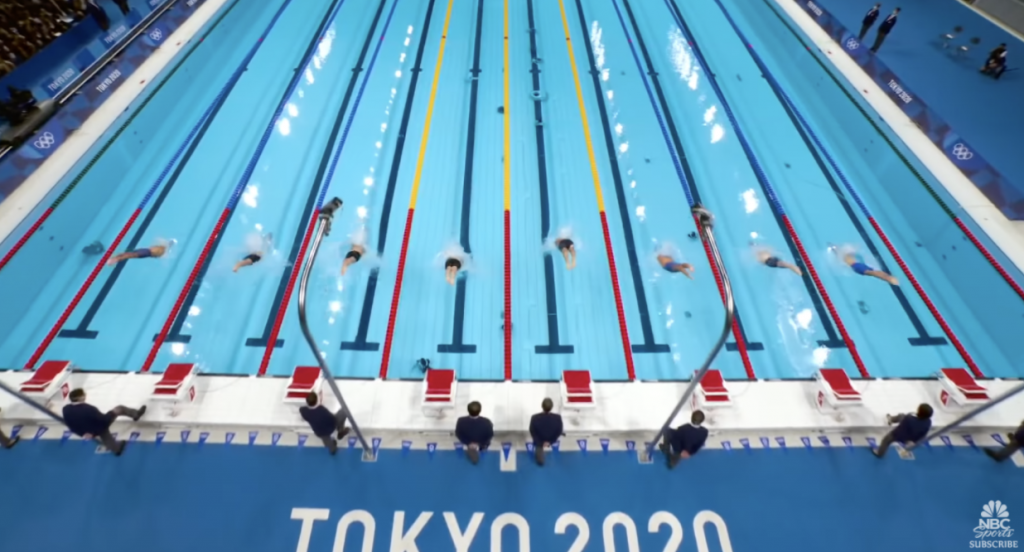 Together, these three hold 15 Olympic gold medals, yet all failed to qualify for this year’s Tokyo Olympics. While some international media speculated that this, combined with the retirement of Michael Phelps and his 23 golds, has ushered in a new and less successful era in American swimming on the global stage.

During the swim events in Tokyo, the team compiled 30 medals, including 11 gold and 10 silver.

Here are some of the articles and news stories we were reading about the USA Swimming team over the last few weeks:

“When you think of swimming, you think Australia and USA,” Caeleb Dressel told reporters in Tokyo. “The two powerhouses of swimming.”And in the final day of competition at the Tokyo Aquatics Center, that proved true as every race was won by swimmers from the two countries. While the night for Team USA ended on a high note, with gold and a world record in the men’s 4×100-m medley relay, its total swimming medal tally of 30 at the Tokyo pool fell just short of its 33 from Rio, when Michael Phelps and Katie Ledecky alone contributed 11 medals to the haul.

Bobby Finke arrived with a rush. The 21-year-old University of Florida swimmer came to these Summer Olympics as a dark horse medal contender in distance freestyle events recently dominated by Europeans. He left with two golds and a new fan following, after his furious final 50-meter charges to win both the 800- and 1,500-meter freestyles. Lydia Jacoby came from nowhere—which, in the American swimming space, is Alaska. Prior to April, the 17-year-old was not seriously on American Olympic radar. Then she kept getting faster every time she swam, and by late July she was here shocking the world (and U.S. teammate Lilly King) to win the 100-meter breaststroke gold medal. This tends to be how it works in American swimming. There is always someone—a group of someones—rising to the top. Which is why, even in an Olympics without Michael Phelps and with Katie Ledecky beatable, the U.S. swim contingent could strut to the airport with 30 medals. Quality depth is a good thing.

One of the most improbable gold medals for USA Swimming came from one of the most improbable of places—Alaska. Not Maryland or California, traditional hotbeds of the next wave of American swimming talent. Seward, Alaska is the home of Lydia Jacoby, who emerged from the upset win in the women’s 100-meter breaststroke. And, in all of Alaska there is a single 50-meter pool, 120 miles north of Jacoby’s hometown.

Jacoby’s success could mean an end to the long-running joke about her training facilities as it has revived the drive to build a new recreation center in Seward, including a brand-new swimming pool where future Olympians will be able to train.

At the Olympic Games Tokyo 2020, Caeleb Dressel joined elite company. The 24-year-old swimmer won five Olympic gold medals in Tokyo, a feat that only 10 other Olympians have accomplished, including swimmers Michael Phelps, Matt Biondi, and Mark Spitz. Historic figures on the list include Finnish running legend Paavo Nurmi, who won five Olympic gold medals on the track in 1924, American Anton Heida who claimed five golds in gymnastics at the 1904 Games, and Eric Heiden, who famously speed-skated to five Olympic gold medals at the 1980 Lake Placid Games. But don’t look for Dressel to flaunt his accomplishments. He is a humble champion who shies away from the spotlight—confessing after he won the 100-meter butterfly in world record time that “the sport was a lot more fun when no one knew my name.” In the Catch-22 of celebrity, Dressel’s humility and honesty will likely have the opposite effect, making him an even bigger champion.

Like the Cycling team, the swimmers were relegated to having their fans and families watch from hometown venues and official watch parties.

While Jacoby’s stunning gold proved to be one of the biggest surprises of the Tokyo games, one of the most heartwarming moments came when we got to see her hometown celebrate from thousands of miles away. Here is that moment as captured by NBC Sports cameras:

The scene back home in Seward, Alaska as 17-year-old Lydia Jacoby won the gold medal 👏👏👏

If you want to track the USA Swimming team as they head into other competitions around the country and the world, be sure to follow all of the athletes here.

So, what’s next for our partners on the global stage? All eyes turn to the 2022 games in China for the next installment of the Winter Olympics. Hard to believe, but these games begin in just under six months!

There, we’ll be rooting hard for the U.S. Ski & Snowboard Team. Until then, we’ll be following all the developments in sports tech that shape the winter games and the athletes competing in Beijing.

Here are the schedules of the next Olympic games: